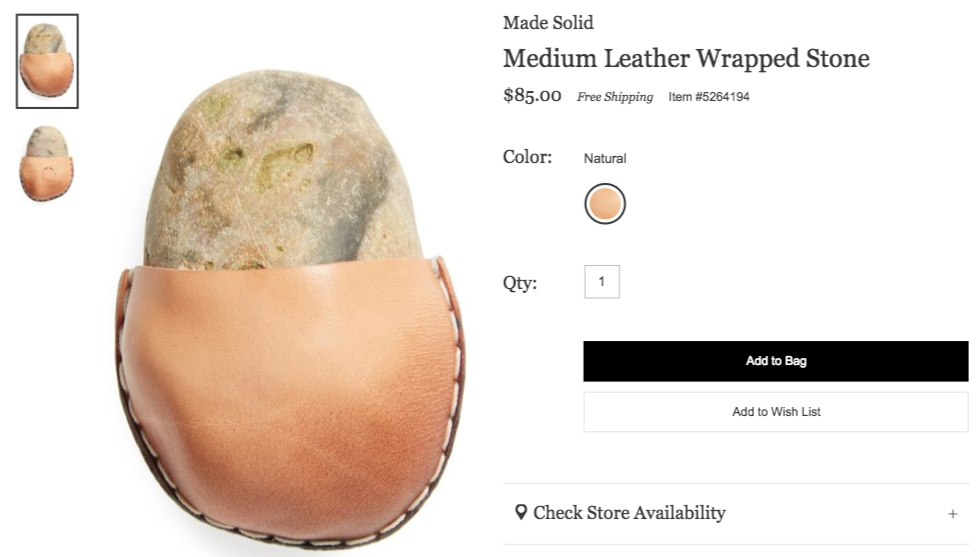 It’s an unusual holiday present people can’t stop talking about: a rock wrapped in leather that’s sold at Nordstrom for $85.

Yes, you read that right — $85 for a rock snuggled up in a tan leather case. (That’s the price for the medium size; a small one was available for the bargain price of $65.)

“A paperweight? A conversation piece? A work of art? It’s up to you,” Nordstrom wrote in a description online.

The product was quickly mocked on social media. Customers couldn’t believe such an item actually existed.

“Can someone explain to me why someone would pay $85 for a rock wrapped in a leather pouch,” one person tweeted.

Some viewed the pricey item as simply a “pet rock.”

And some even attempted to sell their very own rocks.

“I can’t believe that they’re selling just a rock wrapped in leather & for such an expensive price,” another Twitter user commented. “That’s crazy!”

But it may not be so crazy after all, a spokesman for Nordstrom confirmed to CBS News on Thursday that the “Medium Leather Wrapped Stone” has sold out completely online and most stores. In fact, only two “Small Leather Wrapped Stones” remain at a store on Chicago’s Michigan Avenue.

“We’re fully amused by the hilarity of the Stone’s sensation this week!” the spokesman said. “They are indeed real items for sale...”

The product is from an LA-based company called Made Solid, a brand that creates handmade leather products using traditional Western saddle-making techniques.

“All leather stitching, stamp work, finishing and oil/waxing is done by hand,” the Nordstrom spokesman explained. “The Stones are from the San Bernardino Valley. They probably picked the stones up off the ground by hand, but of course, they’re Nature Made.”

No word yet on whether more leather wrapped rocks are on the way, but it’s safe to say the internet can’t wait to see how this plays out.