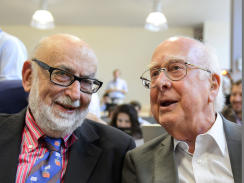 Winning a Nobel Prize is a life-changing achievement. From the moment the award is announced, scientists are thrust into the media spotlight. At least, most of them are. One of this year's recipients of the Nobel Prize in physics, Peter Higgs, a professor at the University of Edinburgh and co-discoverer of the Higgs boson, took a while to get the news.

Higgs, 84, planned a vacation so that he could avoid the potential media frenzy. He doesn't have a cell phone, so the Royal Swedish Academy had no way of reaching him. They had to go ahead and make the public announcement without first notifying him, and he did not participate in the initial press conference.

Even after the announcement, Higgs stayed in the dark. He didn't know he'd won until he returned home and a neighbor congratulated him, he explained at a conference at the University of Edinburgh. "I heard more about it obviously when I got home and started reading the messages," he said, according to the BBC.

Higgs' aversion to cell phones appears to extend to other modern methods of communications as well. The Guardian reports he does not have a computer or email, either.

Higgs and Dr. Francois Englert won the prize for their discovery of the Higgs boson -- the so-called "God particle." First identified in 1964, it could explain why particles have mass, and how they obtained that mass shortly after the Big Bang. But the particle's existence was not verified until July 2012, using the Large Haldron Collider at CERN.

Now that he knows he won, Higgs is quite pleased. "I am overwhelmed to receive this award and thank the Royal Swedish Academy," Higgs said in a statement published on the University of Edinburgh website following Tuesday's announcement.

"I would also like to congratulate all those who have contributed to the discovery of this new particle and to thank my family, friends, and colleagues for their support. I hope this recognition of fundamental science will help raise awareness of the value of blue-sky research."

The award has been a long time coming, and he expressed relief that the saga is over.

"It seemed to me for many years that the experimental verification might not come in my lifetime," he said.