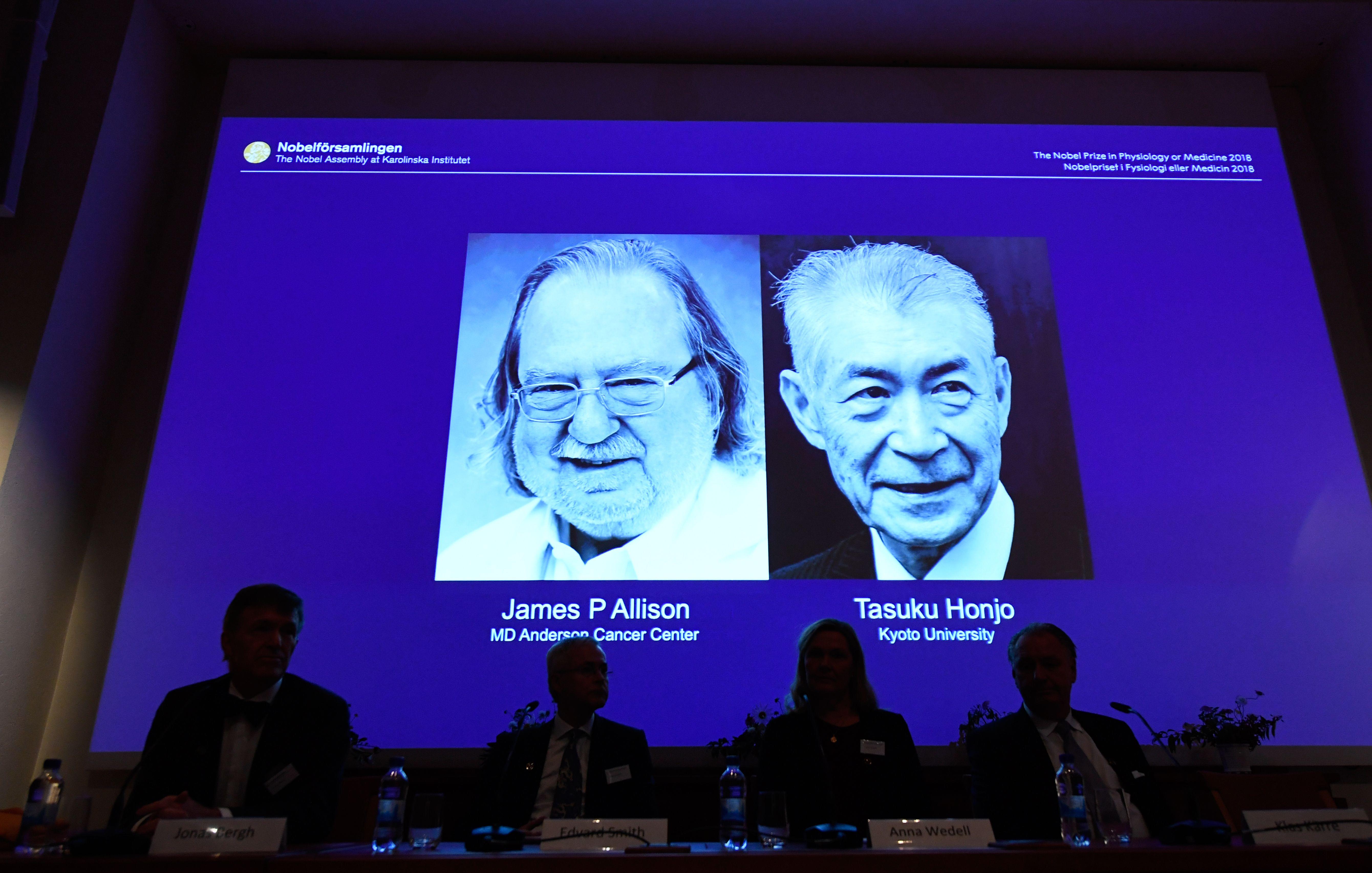 STOCKHOLM -- The Nobel Prize in medicine was awarded Monday to two researchers from the United States and Japan for advances in discovering how the body's immune system can fight off the scourge of cancer. The 9-million-kronor ($1.01 million) prize will be shared by James Allison of the University of Texas Austin and Tasuku Honjo of Kyoto University.

Their parallel work concerned proteins that act as brakes on the body's immune system and it constitutes "a landmark in our fight against cancer," said a statement from the Nobel Assembly of Sweden's Karolinska Institute, which selects winners of the annual prestigious award.

Allison studied a known protein and developed the concept into a new treatment approach, whereas Honjo discovered a new protein that also operated as a brake on immune cells.

"I'm honored and humbled to receive this prestigious recognition," Allison said in a statement released by the university's MD Anderson Cancer Center in Houston, where he is a professor.

"A driving motivation for scientists is simply to push the frontiers of knowledge. I didn't set out to study cancer, but to understand the biology of T cells, these incredible cells that travel our bodies and work to protect us," he said.

Last year's prize went to three Americans for work in identifying genes and proteins that work in the body's biological clock, which affects functions such as sleep patterns, blood pressure and eating habits.

The physics prize is to be announced Tuesday, followed by chemistry. The winner of the Nobel Peace Prize will be named Friday.

A rape conviction, and no Nobel for literature

No literature prize is being given this year, but the Swedish Academy that awards the prestigious prize is still in the limelight. Jean-Claude Arnault, a French citizen who is a major cultural figure in Sweden, is at the center of a sex abuse and financial crimes scandal that has tarnished the academy and forced it to take a year off in its deliberations.

The 72-year-old was sentenced on Monday, just minutes before the award ceremony for the medicine prize began, to two years in prison for the rape of a woman seven years ago. He denied the charges.

The prosecutor had urged the court to sentence Arnault to three years in prison, but he will serve less.

"The defendant is found guilty of rape committed during the night between the 5th and 6th of October 2011 and has been sentenced to imprisonment for two years. The injured party has been awarded compensation for damages," the Stockholm district court said in its verdict.

Even before Arnault's conviction was announced, the Swedish Academy itself had no guarantee that it will be allowed to keep awarding the literature prize.

Lars Heikensten, the head of the Nobel Foundation, has warned that if the Swedish Academy does not resolve its tarnished image his agency could decide that another group would be a better host. He even suggested there could be no Nobel Literature Prize awarded in 2019 either -- which is counter to the academy's current plan to award both the 2018 and the 2019 literature Nobels next year.

He told the Swedish newspaper Dagens Nyheter that it was the Swedish Academy -- not the Nobel Foundation -- that was going through a crisis.

"The ball essentially lies on the Swedish Academy's court," he said.