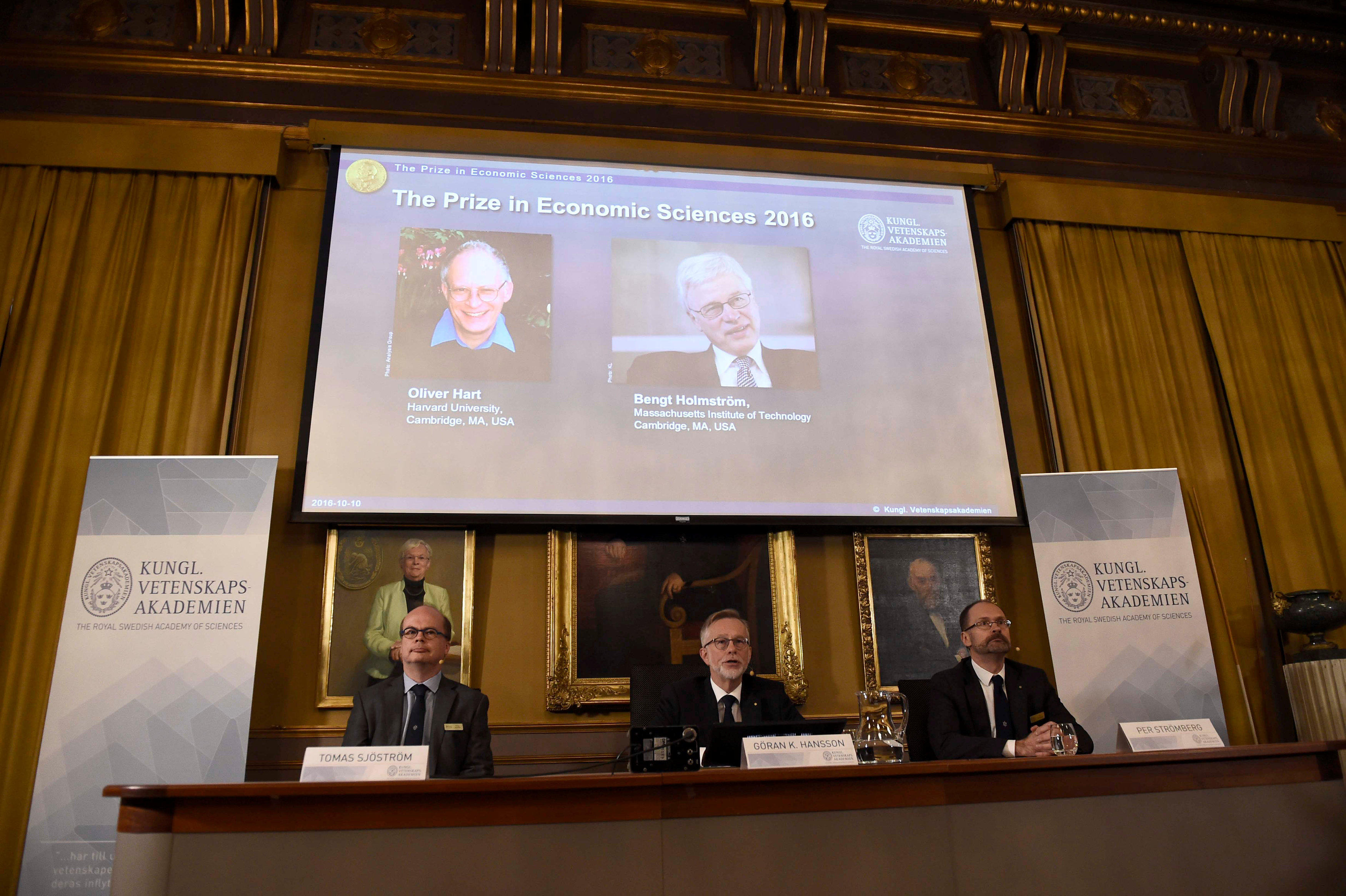 STOCKHOLM -- British-born Oliver Hart and Bengt Holmstrom of Finland won the Nobel prize in economics for shedding light on how contracts help people deal with conflicting interests, from CEO pay packages to whether to privatize a public service.

In announcing the award Monday, the Royal Swedish Academy of Sciences said that “the new theoretical tools created by Hart and Holmstrom are valuable to the understanding of real-life contracts and institutions, as well as potential pitfalls in contract design.”

Speaking to reporters in Stockholm by telephone, Holmstrom said he felt very lucky and grateful.

“I certainly did not expect it, at least at this time, so I was very surprised and very happy, of course,” he said.

In the 1970s Holmstrom showed how a principal, for example a company’s shareholders, should design an optimal contract for an agent, like the CEO. His “informativeness principle” showed how the contract should link the agent’s pay to information relevant to his or her performance, carefully weighing risks against incentives, the academy said.

Holmstrom said his incentive to study contract theory came before he was an academic, when he was working for a company in the 1970s that tried to use computers to figure how to make strategic plans.

“That’s when I realized that the issue wasn’t really about the difficulty of coming up with the best plans,” he said. “The bigger issue was also to create incentives for people to give the right information that is needed for these plans and incentivize them in general.”

Hart made fundamental contributions to a new branch of contract theory in the mid-1980s. His findings on “incomplete contracts” shed new light on the ownership and control of businesses, the academy said.

“His research provides us with theoretical tools for studying questions such as which kinds of companies should merge, the proper mix of debt and equity financing, and which institutions such as schools or prisons ought to be privately or publicly owned,” the academy said.

It cited a 1997 article co-authored by Hart which highlighted how private contractors have stronger incentives for investing in both quality and cost reduction. The authors argued that the incentives for cost reduction sometimes is too strong, and expressed particular concern about privately-run prisons, the academy said.

The U.S. Department of Justice recently decided to stop using private prisons after a report showed the conditions are worse than in government-run prisons.

The economics prize is not an original Nobel Prize. Formally called the Nobel Memorial Prize in Economic Sciences, it was added to the others in 1968 by Sweden’s central bank.

The Nobel Prizes in medicine, physics, chemistry and the Nobel Peace Prize were announced last week. This year’s Nobel announcements will finish Thursday with the literature award.

Each award is worth 8 million kronor, or about $930,000. The laureates will collect them on Dec. 10, the anniversary of prize founder Alfred Nobel’s death in 1896.