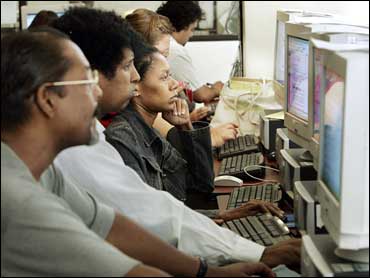 Americans probably suffered a net loss of 2.4 million jobs last year, and the pain is likely to stretch well into 2009 and possibly beyond. The dire situation underscores the recession's toll on employers and workers and the difficulty President-elect Barack Obama will face in reviving the U.S. economy.

The New Year has gotten off to a rough start, and more bad news is expected this week when the government releases data on weekly jobless claims and December unemployment.

"Many companies have a bare-bones mentality. With labor being their biggest expense, you will see them continue to drop the ax on jobs," said Richard Yamarone, economist at Argus Research. "There is absolutely no reason to believe the economy is going to be creating jobs any time soon. There are just no reasons for companies to flick on the hiring switch."

A barometer on layoffs due out Thursday is expected to show that the number of newly laid off people signing up for state unemployment insurance last week rose to 540,000, up from 492,000 in the previous week, according to economists' projections.

The number of people continuing to draw jobless benefit is projected to stay near 4.5 million, demonstrating the troubles the unemployed are having in finding new jobs.

Electronic unemployment filing systems have crashed in at least three states in recent days amid a crush of newly jobless Americans seeking benefits.

On Wall Street, investors worried about the jobs outlook contributed to a sharp decline in stocks. The Dow Jones industrials lost 245 points to 8,769.70 Wednesday.

For all of 2008, employers likely slashed payrolls by at least 2.4 million. That's based on economists' forecasts for a net loss of 500,000 additional jobs in December, as well as the job losses already reported every month last year by the government. Some, however, think the number of jobs cut last month will be higher - around 600,000 or 700,000. The Labor Department will release that report Friday.

If the conservative, 2.4 million estimate of payroll reductions for 2008 proves correct, it would mark the first annual job loss since the previous recession in 2001. It also would be the worst year of job losses since 1945, when employers slashed nearly 2.8 million jobs. Though the number of jobs in the United States has more than tripled since then, job losses of that magnitude would be sober testimony to the nation's economic woes.

With employers throttling back hiring, the unemployment rate is expected to jump from 6.7 percent in November to 7 percent in December, which would be the highest in 15 1/2 years. That figure also will be released Friday.

Vanishing jobs, tanking home values and shriveled investments have forced consumers to cut back sharply on their spending. In turn, businesses have retrenched as well.

Treasury Secretary Henry Paulson on Wednesday said the best option for the future of Fannie Mae and Freddie Mac, which have been under government control since September, could be to run the mortgage giants like public utilities. The new companies would be privately owned, but purchase and securitize mortgages with a credit guarantee backed by the federal government and governed by a rate-setting commission that would establish a targeted rate of return. Still, Congress and the Obama administration must decide the proper role government should play in supporting home ownership, he said.

Consumers and companies are folding under the negative forces of the collapsed housing market, a global credit crunch and the worst financial crisis since the 1930s. The recession, which started in December 2007, already is the longest in a quarter-century.

The expectation of more job losses ahead "will only perpetuate the vicious downward cycle propelling the economy," said Bernard Baumohl, chief global economic at the Economic Outlook Group.

"As the number of people without jobs accelerates, so will the retrenchment in households' spending. If consumers cut back more, business sales and earnings shrink further. The collapse in profit margins will force companies to carry out yet another round of layoffs, which only adds more momentum to the destructive cycle," Baumohl said. "Unfortunately, that's the scenario we see ahead."

Against that backdrop, some companies are realizing they need to cut costs more than they thought just a few months ago to cope with the carnage.

Alcoa's announcement earlier this week that it would lay off 13,500 workers marked yet another attempt for the Pittsburgh-based company to slim down. It had unveiled a series of cost-cutting measures in the fall.

Cessna Aircraft Co. in Wichita, Kansas, said this week it is planning a second round of layoffs as the sinking economy bites into orders for new planes. Textron Inc.'s Cessna last month issued a 60-day layoff notice to about 500 Wichita workers and another 165 workers in Bend, Oregon.

Obama is proposing a mammoth $775 billion package of tax cuts and government spending over two years to revive the moribund economy. With add-ons by lawmakers, the package could swell to $850 billion, his advisers say.

"By now we all know that we are facing a crisis in our economy, one that requires immediate and decisive action to spur the creation of new jobs," Obama said Wednesday.

Even with a big government stimulus, economists still believe the unemployment rate will keep climbing, hitting 8 or 10 percent by the end of this year. Obama's economic advisers estimate that a $850 billion recovery package would lower the jobless rate to about 7.4 percent and create 3.2 million jobs by the first quarter of 2011.

Obama, who takes over Jan. 20, said Wednesday his recovery plan would "save or create" 3 million jobs.

Despite a flurry of radical government relief efforts and the Fed last month slashing a key interest rate to an all-time low, Federal Reserve officials fear the economy will be stuck in a painful rut for some time.

"The economic outlook would remain weak for a time and the downside risks to economic activity would be substantial," according to a Fed document of its closed-door December meeting released Tuesday. In fact, some officials worried about the "distinct possibility of a prolonged contraction."

And, "amid the weaker outlook for economic activity over the next year, the unemployment rate was likely to rise significantly into 2010," the Fed warned.