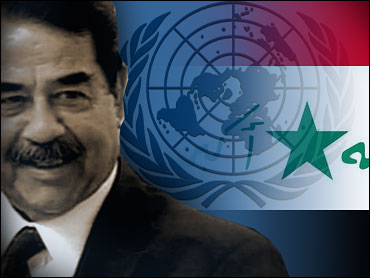 Iraq has withheld a decision on a U.N. order to start destroying its Al Samoud 2 missile program by the end of the week, but said Sunday it is "serious about solving this."

Iraq's chief liaison to U.N. weapons inspectors insisted Baghdad is "clean" of weapons of mass destruction and that there should be no new U.N. resolution on disarming Saddam Hussein, as the United States is demanding.

Iraq's response will likely be a key factor in determining how the U.N. Security Council votes on a resolution the United States is expected to introduce early this week designed to win approval for an attack on Iraq.

"We are serious about solving this," Amin told journalists. He said the order was being studied, "and we hope it will be resolved peacefully, without the interference of others, particularly the Americans."

"If they refused to destroy the weapons, the Security Council will have to make a decision," Annan told reporters Sunday night in Turkey. "I don't see why they would not destroy them."

President Saddam Hussein, meanwhile, was defiant about the U.S. threat of war.

"Americans can harm and destroy buildings and installations, but will never be able to humiliate Iraq," he was quoted as saying by the official Iraqi News Agency. "The people of Iraq are not defending only Iraq, but the whole Arab nation and its security."

Saddam met Sunday with former U.S. Attorney-General Ramsey Clark, and the news agency said the Iraqi president praised Clark for his role in the anti-war movement in the United States. It gave few other details of the meeting.

Former Russian Prime Minister Yevgeny Primakov also was in Baghdad on Sunday, a source told The Associated Press. But his activities — and very presence — were not officially confirmed.

Primakov, who forged close ties with Baghdad as a former Soviet minister, has mediated in Iraq on several occasions. However, his mission to Baghdad in a bid to prevent the 1991 Gulf War ended in failure.

Amin said destroying the missile program would be a blow to Iraq's defenses — but not a serious blow.

Blix ordered the missiles destroyed under U.N. supervision starting Saturday. Some of the Al Samoud 2 missiles have tested at more than the 93-mile range limit set by U.N. resolutions adopted at the end of the 1991 Gulf War. Iraq says they flew beyond the limit because they were not weighed down by guidance and other systems.

But Blix said Iraq had increased the diameter of the Al Samoud in violation of a 1994 order from the previous U.N. inspectors, and that computer simulations showed the missile exceeded the limit. A larger diameter means the missile has the potential to travel farther.

The range limit means Iraq is permitted to have missiles that could reach neighboring Iran, Kuwait, Saudi Arabia, Turkey, Syria and Jordan — but not Israel.

U.N. inspectors now estimate Iraq has between 100 and 120 of the missiles, according to diplomatic sources.

The inspectors on Sunday observed a static test of the Al Samoud 2 at the Al Rafah facility, 80 miles south of Baghdad, and inspected two factories that make missile components. Other teams visited an ammunition plant, a veterinary college and a perfume factory.

Amin repeated Iraq's claims that it is "clean" of weapons of mass destruction, and said Iraq is cooperating with the inspectors in an attempt to prove it.

An example, he said, can be seen in trenches Iraqi has begun to dig at sites where it says it unilaterally destroyed chemical and biological weapons. He said a U.N. team will come to Iraq on March 2 to check the soil for proof of the weapons' destruction.

Blix expressed skepticism over Iraq's claims to have destroyed the stocks of anthrax and VX nerve agent. Blix told Time magazine in an interview to be published Monday that he found it "a bit odd" that Baghdad, with "one of the best-organized regimes in the Arab world," would claim to have no records of the substances' destruction.

Amin also cited as an example of Iraq's cooperation its agreement to let American U-2 spy planes fly over its territory to support the work of the inspectors. He said he expected French Mirage planes to begin flying over the next two days, and that Iraq was negotiating the use of German drones as well.

Amin also said Iraqi officials would meet Monday with a team of South African disarmament experts. South Africa's experience is key, because it built nuclear weapons, then voluntarily dismantled them in the 1980s.

"We will try to use this experience to resolve some outstanding issues," Amin said.

The United States and Britain accuse Iraq of developing weapons of mass destruction and long-range missiles, despite U.N. bans on both. Iraq denies holding such weapons and says its enemies have their eyes on Iraq's oil and on world domination.

One stumbling block for the inspectors has been the refusal by Iraqi scientists to grant interviews without recording them, which the inspectors fear would make them less candid.

Amin suggested that Iraq might not allow U.N. proposals to take the scientists to foreign countries for interviews.

"We think it is not necessary to conduct interviews outside Iraq," Amin said.

Meanwhile, Turkey's foreign minister said he expects his country's parliament will vote Tuesday on whether to allow the U.S. to base troops in Turkey for a war on Iraq.

Yasar Yakis said the "probability is high" for a Tuesday vote. He said 15 outstanding issues in negotiations with Washington on the economic, political and military conditions of the deployment should be resolved by then.