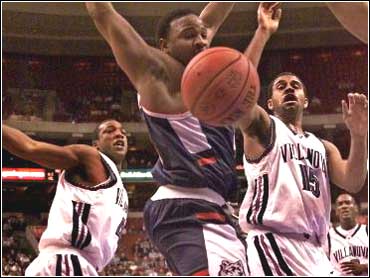 When No. 7 Connecticut's lead over Villanova was trimmed to seven points in the closing minutes, Huskies coach Jim Calhoun felt a tug on his sports coat. He knew exactly who it was: His sick point guard, Khalid El-Amin.

El-Amin, battling a sore back and a stomach ache, stopped Villanova's final comeback bid with a 3-pointer in the closing minutes Wednesday night as Connecticut beat the Wildcats 74-60.

While El-Amin clutched his stomach and asked to be taken out four times, Albert Mouring made 8 of 9 shots and all four of his 3-pointers for a career-high-tying 22 points for the Huskies (16-4, 5-3 Big East).

"Every time I shoot it, I feel like it's going in," Mouring said. "That's a great feeling to have."

UConn won its third straight conference game and had a big shot to answer every Villanova run. The Wildcats (11-8, 2-5) got 19 points on 8-of-14 shooting from Malik Allen but got no closer than seven points down the stretch.

"The things we had feared coming in came to pass," said Villanova coach Steve Lappas, upset with UConn's 20-10 rebounding edge in the first half. "We couldn't keep them off the glass, especially in the first half. Somebody stepped up for them every time we got close, and it was usually a jumper. When they needed a jump shot, they made it. They have answers all over."

El-Amin played hurt in the Huskies' 66-56 victory over Seton Hall on Sunday after suffering a deep thigh bruise last Thursday against Providence. He had a sore back and a stomach ache this time and had 12 points, three assists and six turnovers.

Obviously hobbled, El-Amin couldn't do much but dribble gingerly and set up his teammates. That changed when the Wildcats cut the deficit to sevepoints for the third time in nine minutes on two free throws by Allen that made it 67-60 with 4:06 left.

His eyes and mouth wide as he looked for a teammate, El-Amin dribbled free at the top of the circle and lofted a 24-footer that went in for a 3-pointer that made it 70-60 with 3:44 left and shut the door on Villanova.

"He really, really was sick," Calhoun said. "He asked out four times. I've had him three years and almost 100 games, and he doesn't ask out of basketball games. As soon as they got to seven, I felt a tug on my coat and he wants back in."

Souleymane Wane made two free throws to give UConn a 60-47 lead with 12:06 left. Villanova scored the next three baskets a one-handed putback slam by Ricky Wright, a jump-hook by Allen and a dunk by Brooks Sales.

Mouring stopped the run with a 3-pointer from the corner, ending his perfect night from beyond the arc and giving UConn a 63-53 lead with 8:17 left.

"He hit one shot where he stepped in, pulled the ball back and hit a 3," UConn center Jake Voskuhl said. "I was like, 'That's an NBA move right there."'

Mouring, a 51 percent 3-point shooter, so impressed Calhoun that the coach compared him with a star from last year's national championship team Richard "Rip" Hamilton.

"Every time he starts taking people off the dribble, it's a confidence factor," Calhoun said. "It's a little bit like with Rip. We're starting to set screens for him, and with Khalid, when you get set and get your hands up, the ball is there."

Kevin Freeman scored inside after Mouring's 3-pointer, but Sales made a layup and Brian Lynch hit a 3-pointer from the corner to cut it to seven points again, 65-58 with 4:56 left.

Edmund Saunders hit a tough turnaround jumper, and El-Amin hit his 3-pointer to make it 70-60 with 3:44 left.

Gary Buchanan, Villanova's best shooter who averaged 22 points the last two games, played only nine minutes in the first half and heard a mouthful from coach Steve Lappas when he went to the bench. He finished 3-for-10 for seven points.

UConn made nine straight field goals in the final 8:02 of the first half to take a 46-34 lead.