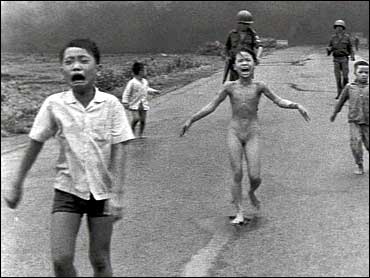 America is finding out more about Richard Nixon, as a result of another 500 hours of tapes of Nixon administration conversations, released Thursday by the National Archives.

In one exchange, he talks about the possibility of using a nuclear bomb in Vietnam; in another, he doubts authenticity of the famous photograph of a young girl running naked down a street, fleeing a napalm attack in South Vietnam.

In one startling tape, then-National Security Adviser Henry Kissinger lays out a series of options for escalating the war in Vietnam, and Nixon responds: "I'd rather use the nuclear bomb."

That idea was quickly dismissed by Kissinger, and Nixon responds: "I just want you to think big."

The following month, Nixon ordered the biggest escalation of the war since 1968.

At another point, Nixon chides Kissinger for being too concerned about civilian casualties.

"Just because he said it doesn't mean it was really an option," Karnow said.

On another tape, Nixon sits down on June 12, 1972, with his chief of staff, H.R. Haldeman, and again discusses the Vietnam War.

This time the focus was on a photo of children running from napalm - which was to become one of the most famous and haunting images of the 20th century.

"I'm wondering if that was fixed," Nixon mused after seeing the photograph.

Haldeman replies, "Could have been."

The photo by Associated Press photographer Nick Ut of 9-year-old Kim Phuc running out of Trang Bang village, about 25 miles west of Saigon, emerged as one of the most compelling images of the war and its impact on civilians. It won the Pulitzer Prize in 1972.

Kim Phuc, now in her late 30s, has spoken about the events captured in the photo many times since and still bears burn scars on her back from the napalm.

"This picture won the Pulitzer Prize and has withstood the test of time as an important icon of the Vietnam War," said Vincent J. Alabiso, AP's vice president for photos. "Its authenticity has never been questioned. AP's record on accurate and honest reporting is known to all."

The conversations were in the archives' largest-ever release of Nixon tapes. The material covers mostly the first six months of 1972, including everything from Nixon's groundbreaking trip to China to the early days after the Watergate break-in.

With this release, historians and researchers for the first time are being allowed to use their own recording equipment to copy the Nixon tapes.

"The sheer volume and contents of the tapes will give historians and others plenty of research opportunities," said Karl Weissenbach, director of the Nixon Presidential Materials staff at the archives.

The archives now has made public roughly 1,700 of the 3,700 hours of conversations Nixon taped. Most of the segments related to Watergate had been previously released, but the new tapes contain a few additional conversations, and include full conversations where previously only excerpts had been available.

The public now can hear what was said before and after the infamous 18and-a-half-minute gap in the Watergate tapes three days after the break-in, and hear the full context of the "smoking gun" snippet, which revealed that the president was interested in using the CIA to derail the FBI's investigation of the break-in.

"This time, you're getting the total historical perspective and complete context surrounding the Watergate break-in," Weissenbach said.