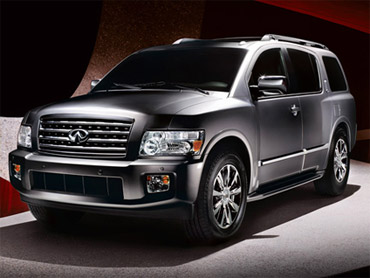 Most of the recalled vehicles are in the U.S., with smaller numbers scattered across the globe.

The brake pedal recall affects 179,000 vehicles in the U.S. and about 26,000 in the Middle East, Canada, Russia and several other countries.

A pin in the pedal assemblies on certain 2008 to 2010 Nissan Titan pickups, Infiniti QX56 and Nissan Armada SUVs, and some 2008 and 2009 Nissan Quest minivans can come loose and cause reduced braking force, Nissan said Tuesday in a statement.

No injuries or crashes have been reported, the company said. Customers with loose brake pedals should contact their dealer.

Nissan blamed the problem on a manufacturing defect by a parts supplier. Dealers will inspect the vehicles for loose pins and repair them if necessary.

The company said in a statement that all vehicles now on sale do not have the problem.

Nissan also is recalling 419,000 vehicles in the U.S. and 53,000 elsewhere because gas gauges can show fuel left in the tank when it's actually empty.

The recall affects 2005 through 2008 Nissan Titan, Armada and Infiniti QX56s as well as Nissan Frontier pickups and Pathfinder and Xterra SUVs produced between January and March 2006 and between October 2007 and January 2008.

Due to a problem with a sensor inside the fuel tank, the gauges can show gas tanks a quarter full when they are in fact empty.

Nissan suggests keeping a half-tank of gas in the vehicles until the gauges can be repaired, eliminating the risk of running low on fuel.

Owners of vehicles in both recalls will be notified when to bring their cars and trucks in for repairs. In materials distributed to dealers, Nissan said the brake pedal recall begins on March 22, while the fuel-gauge recall will take place in two groups, one beginning March 22 and the other starting in April.

About 130,000 vehicles are covered by both recalls.