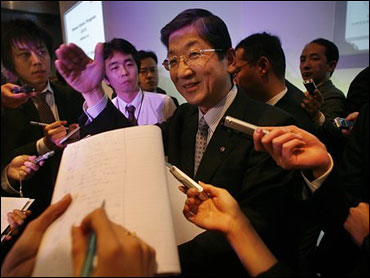 Nissan Motor Co. announced plans Monday to launch a next-generation fuel cell vehicle in the early 2010s in Japan and North America as part of its mid-term environmental strategy.

The company aims to introduce a new fuel-cell vehicle using an improved fuel stack - the main part of such vehicles - developed in-house after 2010 that will offer performance on par with gasoline-power automobiles, Shiga said.

Fuel cell vehicles run on the power produced when oxygen in the air combines with hydrogen that's stored in the fuel tank - producing only harmless water vapor.

But for the mid-term future, Shiga said the company plans to focus on the internal combustion engine as the primary power source for its vehicles, and will concentrate on improving engine efficiency.

As part of that effort, he said, Nissan plans to develop a "three-liter car" capable of traveling 60 miles using just 0.8 gallons of gasoline. The company hopes to unveil a new model in Japan in 2010.

Nissan will also unveil a 100-percent bioethanol fuel-ready model for the Brazilian market by 2009 and plans to introduce an electric vehicle starting in Japan during the early part of the next decade.

Demand for cleaner, safer and more fuel-efficient vehicles is growing, and some companies have formed partnerships to share costs and speed development.