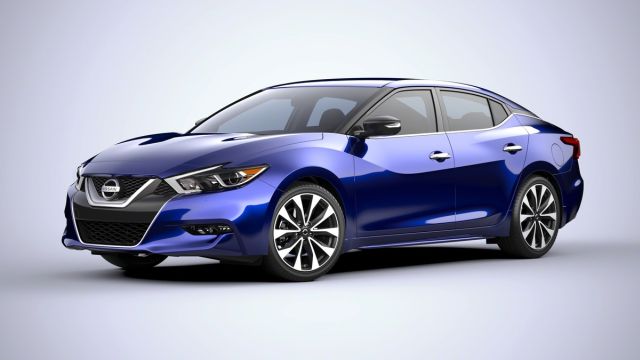 With the redesigned 2016 Maxima -- on sale today -- Nissan is aiming to convince luxury brand shoppers that the Maxima serves up more premium features for the money than the Audi A4, Acura TLX or BMW 3-series.

With beefed up power and handling, the Maxima combines sporty performance (see test drive impressions below) and a comfortable, roomy passenger cabin. With models ranging from $32,410 to $39,860, the Maxima compares in price to the lower end of the spectrum for cars like the BMW 3-series ($32,950 to $62,800).

Maxima's large-sedan competitors like the Chrysler 300 are trying a similar strategy, says analyst Karl Brauer of Kelley Blue Book. "Companies have to go after premium buyers with their large sedans because the midsize sedan segment has gone so far upscale," Brauer told MoneyWatch in an e-mail. "The new Chrysler 300 in Platinum trim makes a very convincing luxury statement, and the new Maxima is taking the same approach."

The Maxima shares the engineering and production platform used by Nissan's midsize, high-volume entry, the Altima. But with the Maxima, Nissan is aiming not for high-volume sales but for high profit per car sold, Brauer said. "The Maxima at the high end of its pricing range should be far more profitable than the Altima," he added.

Now, let's put wheels on the road and see how the new Maxima looks, drives and rides. Here are some impressions I got during a test drive at a Nissan event in New York City: