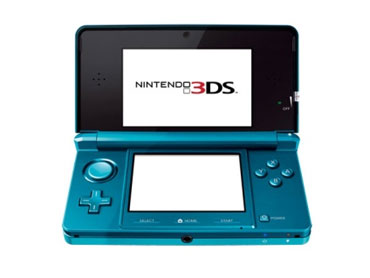 Promising to usher in a new era in 3-D entertainment, Nintendo says its glasses-free handheld 3DS will go on sale on March 27 in the U.S. for $250. That's the same price that the revolutionary Wii console cost when it went on sale in 2006.

The president and chief operating officer of Nintendo of America, Reggie Fils-Aime, said Wednesday the 3DS is a "truly unique experience that doesn't exist anywhere else."

"This is a different kind of 3-D. Something you haven't experienced before. Not in theaters, not at trade shows." Fils-Aime told a crowd of journalists, bloggers and analysts in New York City. "Of course, there are no glasses."

The gadget features a touch screen on the bottom and a 3-D screen on top. It has three cameras, one facing the user and two facing outward. The latter two let you take 3-D photos, which can be instantly displayed on the screen. There's also an accelerometer and a gyroscope, which track players' movements and how they tilt the screen, so that they can see the 3-D games from different angles.

A "Mii Creator" uses photos you take of yourself to instantly create a cartoon avatar based on your image. Then you can adjust it as you like.
- - The 3DS includes new social features, including "StreetPass," which lets users exchange game information with other 3DS users nearby. For example, your Mii avatar or game high scores can appear on your friend's 3DS if they have also chosen to activate this feature.

Nintendo Co. said more than 30 games will be available for the 3DS by early June. Games will range from "Nintendogs + Cats," which adds feline companions to the popular puppy simulator to "The Legend of Zelda: Ocarina of Time 3D" to 3-D versions of EA's Madden NFL Football" and Capcom's "Resident Evil: The Mercenaries." Older games, including those for the original Game Boy, will be available for download.

The 3DS will be available in black and shiny aqua blue. It can play games from older DS systems, but they just won't be in 3-D. The 3-D gradient is adjustable on the 3DS, or it can be turned off completely. If your eyes don't adjust to the 3-D screen immediately, it helps to start out the games in 2-D mode and then slowly turn up the 3-D slider.

Nintendo recommends that children aged 6 or younger should not play 3-D games because it could affect the development of their vision, similar to warnings issued by makers of other 3-D products.

But the American Academy of Ophthalmology says there are currently no conclusive studies on the short- or long-term effects of 3-D products on children's eye development or vision health. At the same time, if a healthy child develops headaches or can't see 3-D images, this could be a sign of an eye disorder, the group said in a statement this week.