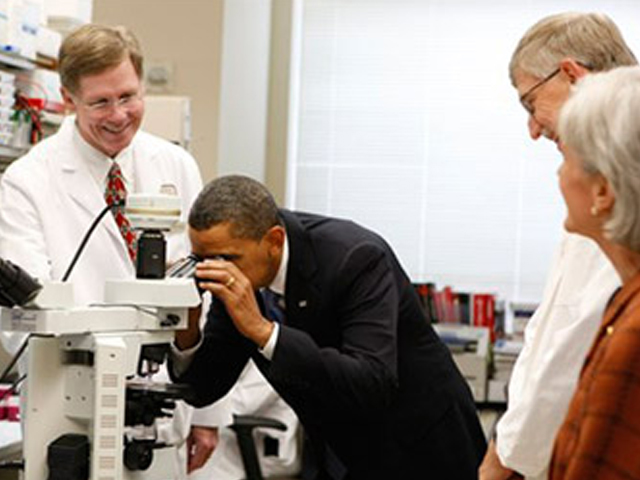 WASHINGTONFederal health agencies are feeling the effects from the government shutdownalready.

The shutdown will have the National Institutes of Health (NIH) turning away patients hoping for care from its hospital of last resort. The Centers for Disease Control and Prevention (CDC) said it had to send home workers who study and track disease outbreaks and other health risks.

"I usually don't lose sleep despite the threats that we face, but I am losing sleep because we don't know if we'll be able to find and stop things that might kill people," CDC director Dr. Tom Frieden told CBS News correspondent Mark Strassmann Tuesday.

Patients hoping to enroll for treatment in cutting-edge research studies at the NIH's Clinical Center hospital will have to seek care elsewhere during the shutdown.

"This is the place where people have wanted to come when all else has failed," NIH director Francis Collins told the Associated Press. "It's heartbreaking."

Collins estimates that each week of the shutdown would force the agency's renowned research hospital to turn away about 200 patients, 30 of them children, who want to enroll in studies of experimental treatments. Many patients seeking care at the NIH Clinical Center have exhausted other options.

The Clinical Center also houses the Undiagnosed Diseases Program to provide answers to patients with mysterious conditions that have long eluded a diagnosis.

Collins said the only exception he can make is for a child with a life-threatening illness. But patients already enrolled in studies under way at the NIH Clinical Center will continue to receive care.

Many would-be patients may qualify for research studies at other hospitals around the country.

Outside of the NIH hospital, laboratory experiments ranging from creating better flu vaccines to finding the cause of autism also were suspended as scientists were sent home.

But Collins said the ripple effect would be felt far beyond NIH's Bethesda, Md., campus. The shutdown comes on top of what he called a historically bad year for scientists who tried to get financing from the nation's leading funder of biomedical research.

The NIH lost $1.5 billion to spending cuts known as the sequester, meaning hundreds of projects around the country didn't get financed. It stands to lose $600 million more whenever the government reopens.

For the fiscal year that ended Monday, NIH was able to fund only about 16 percent of the grant applications it received, Collins said -- down from about 1 in 3 applications funded a decade ago

The next deadline for researchers to apply for NIH grants is Monday but for now, no government employees can help them with the process, Collins noted. Once the government does reopen, NIH is scheduled to lose another $600 million from a second round of sequester cuts, meaning hundreds of additional projects that won't be funded, he said.

"If you expected new treatments for cancer or a new universal influenza vaccine or discovering the causes of autism were going to move forward at the maximum it could, that will not be the case," Collins said. "This is a profoundly discouraging day."

The NIH is not the only government health agency to feel the shutdown. Frieden said that two-thirds of the CDC's employees -- about 8 thousand people -- are not at work protecting Americans from health threats.

That includes tracking outbreaks of diseases and hospital-acquired infections, foodborne illnesses and the 2013-2014 flu season, which the agency has recently been updating the public on along with vaccination rates.

"The bottom line is we don't have the people in the field, in the lab to find out what's happening and stop problems from happening," said Frieden.