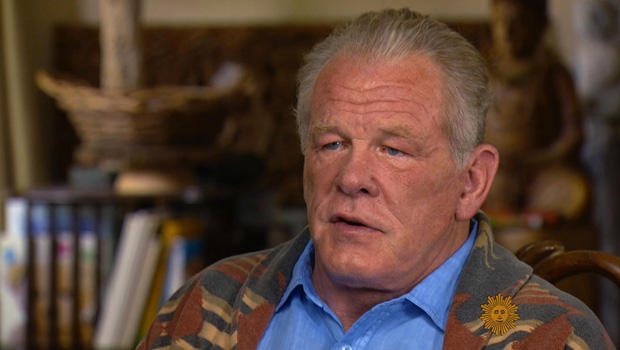 Nick Nolte played a tough-talking lieutenant colonel in the 1998 film “The Thin Red Line.” These days he’s playing a tough-talking former President, while also finding time for some Questions & Answers with our Lee Cowan:

For all the things his fans have been curious about over the years, Nick Nolte says we were the first to ask about his glass-working hobby. “I got hooked on it right away. I thought geez, what a way to calm down, ya’ know?”

He’s been doing it for some 30 years, making beauty out of fire, which in a way is a lot like his own life.

He’s had colorful moments, and he’s had a few meltdowns. But despite his rough exterior, Nolte can seem fragile, too.

“You don’t really look at acting as a career -- it’s something that you need to do,” Cowan suggested. “Even now, at 75 you still feel the need?”

“Yeah, it’s a need in the sense I can’t find anything as complex and interesting to do,” Nolte replied. “But I need it in a story. I don’t want to do reality. Because reality never runs smooth.”

So, he says, he keeps reality at a distance -- all while keeping his craft close.

There’s an emotional intensity to much of his work, whether it’s opposite Jacqueline Bisset in “The Deep,” or his Oscar-nominated turn with Barbara Streisand in “The Prince of Tides.”

He can hold his own with Robert De Niro or with Eddie Murphy.

For someone who doesn’t like reality, his performances are often so real they can be hard to watch.

Nolte said, “That’s what you have to decide: Am I going to take the audience into life, into what really life is, or am I just going to stay on the fringes?”

So when Epix TV began the search for an actor who could play a volatile, hard-drinking former U.S. president, Nolte won the role in a landslide.

“The concept was so beautiful,” he said. “It’s about a man who was president 25 years ago, he’s been in retirement for 25 years.”

“Graves” is the story of a political epiphany -- a man who sets out to right his administration’s past wrongs in often unpredictable and very public ways.

“You seem like you’re always at your best when you’re playing somebody who has got some wrongs to right, or some road to recovery that you’ve got to find, and that’s what this role is, right?” Cowan asked.

“Well, that is what this role is, but this is about the sin we all carry.”

“Which is what we were born with. Being human. Fallible. That’s what the affliction is.”

Nolte knows a little something about fallibility. His Midwest childhood was restless. Born in Omaha, he never found school much to his liking. Sports made the most sense, especially football.  And he played for many different college teams. “How come you went to so many?” Cowan asked.

He drifted around selling fake draft cards for a while until he was arrested for it in 1961. It wasn’t a political statement against the Vietnam War, he says. It was just a way for underage kids to get into bars. “I’d buy ‘em for $4, $5, and then sell ‘em for $25,” he explained.

But it was a federal offense. Although it ended in a suspended sentence, the experience so affected him, Nolte used it as the backstory for his homeless character in the film “Down and Out in Beverly Hills.”

Acting was Nolte’s way of dealing with reality, a coping mechanism. He started small, doing regional theater in places like Minnesota and Arizona.

He moved to Hollywood and was 35 before he got his first big break, on the TV mini-series “Rich Man, Poor Man.”

His blue eyes and blonde hair helped land him a Clairol ad, and by the 1990s Nolte was named the Sexiest Man Alive by People magazine.

But all that fame, he said, was just another thing he had to cope with -- and it turned out, he didn’t handle it all that well.

“You know, there’s a moment of fame, of recognition, and then it’s over,” he said. “Now if you carry that on, then you’re trying to stay high. And in the old days, we would get things that would make us high to try to duplicate that feeling.”

“You’d said you struggled with drugs and alcohol pretty much most of your life?” Cowan asked.

“Yeah … but I’ve struggled with everything most of my life!”

“Did you have to get help?”

It was after one, now infamous night back in 2002. He had been taking GHB, the so-called “date rape drug.” Nolte says he was using it to bulk up, but it’s also a powerful tranquilizer.  “I’m just lucky to be here.”

“Yeah, I could have killed somebody else. That would be the tragedy.”

He plead no contest, entered rehab, and eventually returned to his life in Malibu. He lives here in relative peace with his longtime companion, Clytie Lane, and their nine-year-old daughter, Sophie.

And he still goes out to that glass-blowing studio almost every day.

It’s one escape from the demons that still haunt him, but the best way to keep them at bay has been to vanish into a role.

For Nolte, that’s as real as it gets.

To watch a trailer for “Graves” click on the video player below.