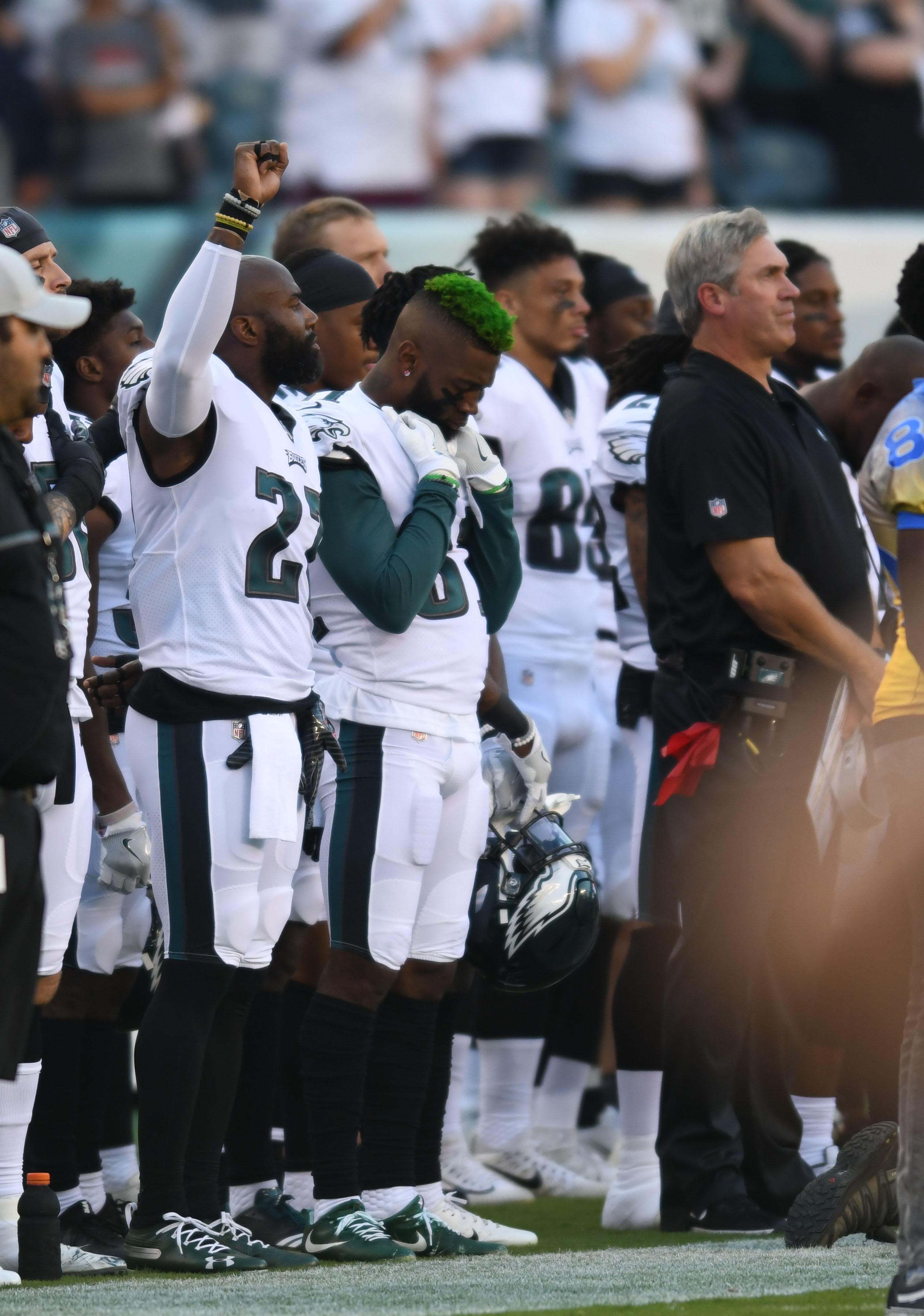 Defensive end Michael Bennett walked out of the tunnel during the anthem and walked toward the bench while it played. It appeared all the Steelers stood.

At Miami, Dolphins receivers Kenny Stills and Albert Wilson and defensive end Robert Quinn protested during the anthem. Stills and Wilson kneeled behind teammates lined up standing along the sideline. Quinn stood and raised his right fist. There were no apparent protests by the Buccaneers.

Stills kneeled during the anthem during the 2016-17 seasons and has been vocal discussing social injustice issues that inspired the protest movement by NFL players.

And in Seattle, three Seahawks players ran into the tunnel leading to the team's locker room prior to the playing of "The Star-Spangled Banner."

Defensive linemen Branden Jackson and Quinton Jefferson, and offensive lineman Duane Brown left the field following team introductions and before the start of the anthem. They returned to the sideline immediately after it concluded. All three were among a group of Seattle players that sat during the anthem last season.

In Jacksonville, four Jaguars remained in the locker room during the national anthem, and team officials said it would be up to the players to explain why they weren't on the field. Cornerback Jalen Ramsey, linebacker Telvin Smith, and running backs Leonard Fournette and T.J. Yeldon joined teammates on the sideline after the anthem.

"But as a man I've got to stand for something. I love my team, I'm dedicated to my teammates, and that's what we're talking about. I did what I did. It was love. I hope people see it and respect it. I respect views."

At Baltimore, both teams stood, but while most of the Ravens lined up shoulder to shoulder on the sideline, second-year linebacker Tim Williams stood alone in front of the bench with his back toward the field.

All of the players on each team at New England appeared to stand for the national anthem, some bowing their heads and others placing their hands on their hearts. The Patriots observed a moment of silence beforehand for Weymouth, Massachusetts, police officer Michael Chesna, who was killed last month in the line of duty.

The league and the players' union have yet to announce a policy for this season regarding demonstrations during the anthem after the league initially ordered everyone to stand on the sideline when "The Star-Spangled Banner" is played, or remain in the locker room.

"The NFL has been engaged in constructive discussions with the NFL Players Association regarding the anthem and issues of equality and social justice that are of concern to many Americans," league spokesman Brian McCarthy said in an email.

"While those discussions continue, the NFL has agreed to delay implementing or enforcing any club work rules that could result in players being disciplined for their conduct during the performance of the anthem.

"Meanwhile, there has been no change in the NFL's policy regarding the national anthem. The anthem will continue to be played before every game, and all player and non-player personnel on the field at that time are expected to stand during the presentation of the flag and performance of the anthem. Personnel who do not wish to do so can choose to remain in the locker room.

"We remain committed to working with the players to identify solutions and to continue making progress on important social issues affecting our communities."

In 2016, former San Francisco 49ers Colin Kaepernick began kneeling during the National Anthem in an effort to bring awareness to racial injustice. After the regular season, Kaepernick opted out of his contract with the 49ers when it appeared he would be released.

Last year, President Trump has waded into the debate, saying the NFL should fire any players who kneel during the anthem. On Sept. 25, days after Mr. Trump said players should be fired for protesting during the anthem, more than 200 players protested. But Mr. Trump insisted in a tweet afterward that players who kneel are "showing total disrespect to our Flag & County."