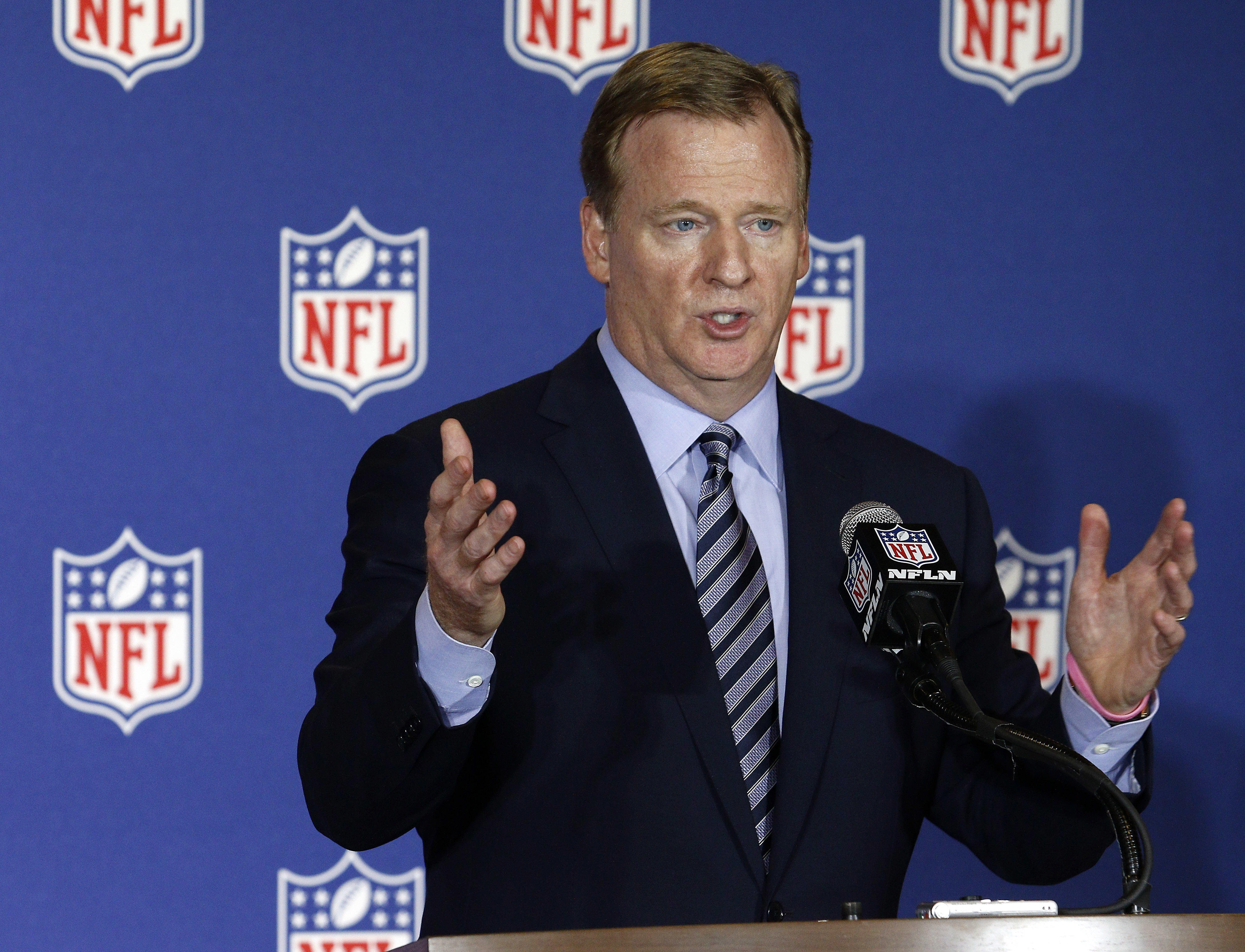 Asked by The Associated Press about Kaepernick’s decision not to stand before games when the national anthem is played, Goodell said in an email Wednesday: “I don’t necessarily agree with what he is doing.”

Goodell added that NFL players have a visible platform for their viewpoints. With that comes responsibility to use those platforms properly.

“We have to choose respectful ways of doing that so that we can achieve the outcomes we ultimately want and do it with the values and ideals that make our country great,” said Goodell, whose late father, Charles, was a U.S. senator.

“I think it’s important to have respect for our country, for our flag, for the people who make our country better; for law enforcement; and for our military who are out fighting for our freedoms and our ideals.”

Kaepernick wouldn’t stand for the anthem at his team’s preseason games, with San Francisco 49ers teammate Eric Reid and Seattle’s Jeremy Lane doing the same. Kaepernick has cited racial injustice and police brutality among the many reasons for his actions and said he plans to continue to not stand for the anthem during the regular season.

Kaepernick said Wednesday on his Instagram account that he will donate all the money he receives from his jersey sales to charity to thank fans for their support. He said he’s pleased his 49ers jersey has become the top seller in the NFL since his protest became public.

An unexpected side effect of Kaepernick’s controversial decision has been that sales of his jersey have skyrocketed.

49ers’ jerseys with Kaepernick’s No. 7 are the top seller on the NFL’s e-commerce site, NFL Shop, and on the team’s merchandise page. According to ESPN.com, more Kaepernick gear was sold last week on the 49ers’ site than in the past eight months combined. The surge is remarkable given that Kaepernick is beginning the season as a backup behind Blaine Gabbert.

In addition to outselling the team’s starting quarterback, Kaepernick’s jersey has more buyers than Joe Montana’s, who led the 49ers to four Super Bowls. It’s more popular than Philadelphia Eagles rookie quarterback Carson Wentz, who is due to make his NFL debut this Sunday versus the Cleveland Browns, and Ezekiel Elliott, the Dallas Cowboys’ first-year running back who’s already being touted as a possible Rookie of the Year.

The 49ers open their season at home against the Los Angeles Rams on Monday night.

Also in reaction to Kaepernick’s actions:

- U.S. hockey coach John Tortorella said he’d bench any player who stays seated during the national anthem. Tortorella, who will coach the United States at the upcoming World Cup of Hockey, told ESPN : “If any of my players sit on the bench for the national anthem, they will sit there the rest of the game.”

Tortorella, who also coaches the Columbus Blue Jackets, talked a bit more about his view Wednesday.

“I feel very strongly of being able to say what you want to say in your way, about you’re upset about things,” he said. “You have your right to do that, but to bring that flag and anthem into it and drag that down, no way. So I feel strongly both ways.”

Tortorella’s son Nick is an Army Ranger and is deployed in the Middle East.

“When there are men and women that give their lives for their flag, for their anthem, have given their lives, continue to put themselves on the line with our services for our flag, for our anthem, families that have been disrupted, traumatic physical injuries, traumatic mental injuries for these people that give us the opportunity to do the things we want to do,” Tortorella said. “There’s no chance an anthem and a flag should come into any type of situation where you’re trying to make a point.”

Marshall also discussed the issue a bit at practice Wednesday.

“Like it or not, this is a civil rights movement. It’s a civil rights issue,” Marshall said. “Martin Luther King did an amazing job of making sure everyone was at the table. What I mean by that is, he never once went against America. He always said America was an amazing nation. Whether he believed that or not, I don’t know, but I say that because if you want to get things done, you have to do it in a way where everyone’s at the table.”

- Seahawks receiver Doug Baldwin said he has considered joining Lane in not standing for the anthem.

“I want to make sure I get all my ducks in a row before I do so,” Baldwin said.

“My grandfather being in the military it hit home for me as well. It’s the veterans that have reached out and said that’s what they fought for, that’s what they sacrificed their lives for was to give people back home under the flag, under this country, the opportunity to stand up or sit for what they believe in. So that was very heartening for me to hear that.”

Teammate Bobby Wagner believes the Seahawks should act together because “that’s that the world needs to see.”

“Anything we want to do, it’s not going to be individual,” he added. “It’s going to be a team thing. The world needs to see people coming together versus being individuals.”

“I don’t doubt his sincerity,” Mr. Obama said of Kaepernick.

Mr. Obama’s comments came during a news conference on his trip to Hangzhou, China, for the G-20 summit.

The president added that Kaepernick “cares about some real, legitimate issues” and that the whole situation has put more attention on “issues that need to be talked about.”