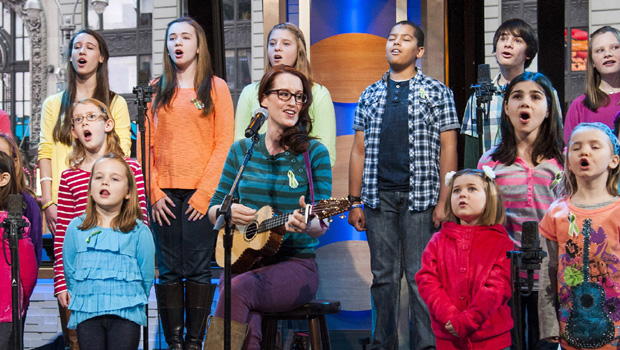 A group of children from Newtown, Conn. who recently recorded a version of "Over the Rainbow" are preparing for a live appearance during the E! Network's Grammy Awards preshow on Sunday.

"American Idol" host Ryan Seacrest will be flying a crew to Connecticut and plans to interview the children via satellite during the E!'s "Live From the Red Carpet" preshow, said Tim Hayes, who co-produced the recording.

The children also will be singing Carly Rae Jepsen's hit song, "Call Me Maybe," he said.

The group of 21 kids, some of whom attend Sandy Hook Elementary School, recorded "Over the Rainbow" last month with singer-songwriter Ingrid Michaelson at the Fairfield, Conn., home of Chris Frantz and Tina Weymouth, two former members of the Talking Heads and Tom Tom Club rock bands.

Sabrina Post, who runs a performing arts school in Newtown and directs the group, said the kids wanted to do something with their talent to honor their friends and neighbors who died in the Dec. 14 massacre at the school, and help the community heal.

"This opportunity to do something positive lets the kids know that although a lot of things happen in our world that are not pleasant, like this that happened with us in Newtown, there are many giving people and wonderful things that can come out of life, so don't get discouraged," she said. "It teaches them to use their gifts to work through things."

The children also have sung the song on ABC's Good Morning America and at a benefit concert that featured artists such as Paul Simon and Johnny Winter. Some of them are also appearing on Katie Couric's syndicated show this month, Hayes said.

He said they have no plans to record anything else, or have the kids make any more public appearances.

"We know the kids involved have had a wonderful experience, but we think this chapter is now done, and we want these kids to get back to being kids," he said.

Copies of their version of "Over the Rainbow" are being sold on Amazon and iTunes.

The proceeds from the download of the single benefit the United Way of Western Connecticut and the Newtown Youth Academy. The nonprofit sports center opened free programs to Newtown children after the shooting and hopes to expand free programming.

The Grammy performance follows Sunday's appearance by another group of Newtown children at the Super Bowl.

Jennifer Hudson joined a chorus from Sandy Hook Elementary School to sing "America the Beautiful" before the game. The emotional performance had some players on the sideline on the verge of tears.