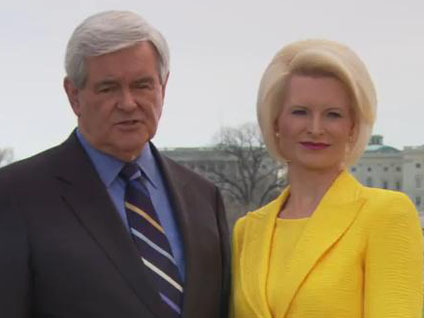 Former House Speaker Newt Gingrich, who entered the 2012 presidential race just last Wednesday, is having an epically bad week. And it's only Tuesday.

On Sunday, Gingrich angered conservativesby criticizing Rep. Paul Ryan's budget plan and semi-supporting an individual mandate for health care. Now he is being stung by a report that he carried up to $500,000 in debt to the Tiffany jewelry company - and may still be carrying it.

Politico got the scoop by looking at financial records filed with the Clerk of the House of Representatives in 2005 and 2006. (CBS News has now viewed the records and can confirm the report.) While Newt Gingrich has not been in the House since 1999, his wife, Callista Gingrich, worked for the House Agriculture Committee through 2007.

Gingrich spokesman Rick Tyler declined to comment to Politico on why the Gingriches were carrying the debt to the jewelry company - or whether they still carried it.

The disclosures also indicate that the Gingriches owed between $15,000 and $50,000 to the credit card company American Express. In 2006, the couple reported between $1 million and $2.5 million in assets.