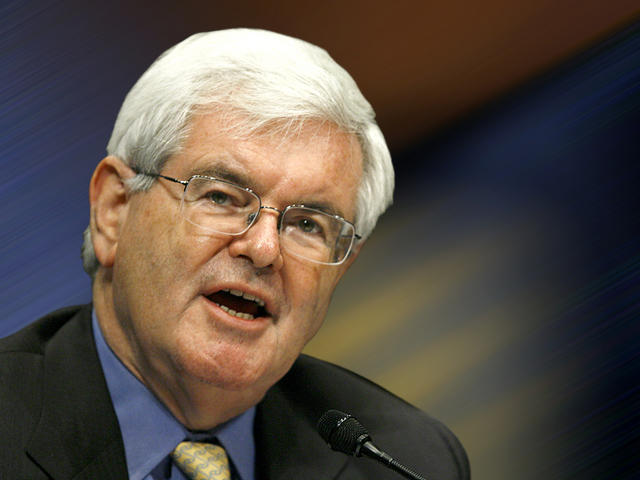 "I'm Newt Gingrich, and I'm announcing my candidacy for President of the United States because I believe we can return America to hope and opportunity, to full employment, to real security, to an American energy program, to a balanced budget," Gingrich says in his announcement video at left.

In the two-minute video, featuring Gingrich speaking directly to the camera in front of a black background, the former House speaker points to his past achievements.

"I worked with President Ronald Reagan in a very difficult period," he says. "We got jobs created again, Americans proud of America, and the Soviet Union disappeared." He then talks about his tenure as House speaker, pointing to his efforts on welfare, controlling spending, cutting taxes, reducing unemployment and balancing the budget.

"We've done it before, we can do it again," the Georgia Republican says, uplifting music swelling in the background.

Gingrich then appeals to Americans to work together to find solutions and asks them to "insist on imposing those solutions on those forces that don't want to change."

"There are some people who don't mind if America becomes a wreck as long as they dominate the wreckage, but you and I know better," he says.

Gingrich asks Americans to "look reality in the face" and "make the tough choices" to "get the job done."

He says a "much better American future" is ahead, with more jobs, better health care, and - in what appears to be an appeal to older voters - "longer lives" and "greater independent living."

In a reference to health care reform and other Obama administration initiatives derided by Republicans as reflecting an oversize government, he then argues for a "decentralized" America "with power once again back with the American people and away from the Washington bureaucracy."

Gingrich, who has been polling in the high-single digits in early polls, is entering a wide-open Republican field. His rivals include Mitt Romney and Tim Pawlenty; some of the biggest names in the GOP, among them Sarah Palin and Mike Huckabee, have yet to announce their intentions.

A well-connected insider who has crafted an image as a thought leader in the GOP, Gingrich is a prolific fundraiser well known to the Republican primary electorate. The 67-year-old was the face of the 1994 Republican takeover of the House; while his high-profile tenure in Congress gives him immediate credibility, it also means he may be seen by some voters as a figure of the past.

In a Fox News interview Wednesday night to announce his candidacy, Gingrich came out swinging, slamming President Obama's foreign policy as "a very, very discouraging mess" and his energy policy as "anti-American."

"President Obama should be ashamed of himself," Gingrich said, according to the Associated Press.

Gingrich also added that he's become "more mature" since he last held office 12 years ago. "I've had time to reflect on what worked and what didn't work," he said.

What are the 2012 GOP candidates running from?