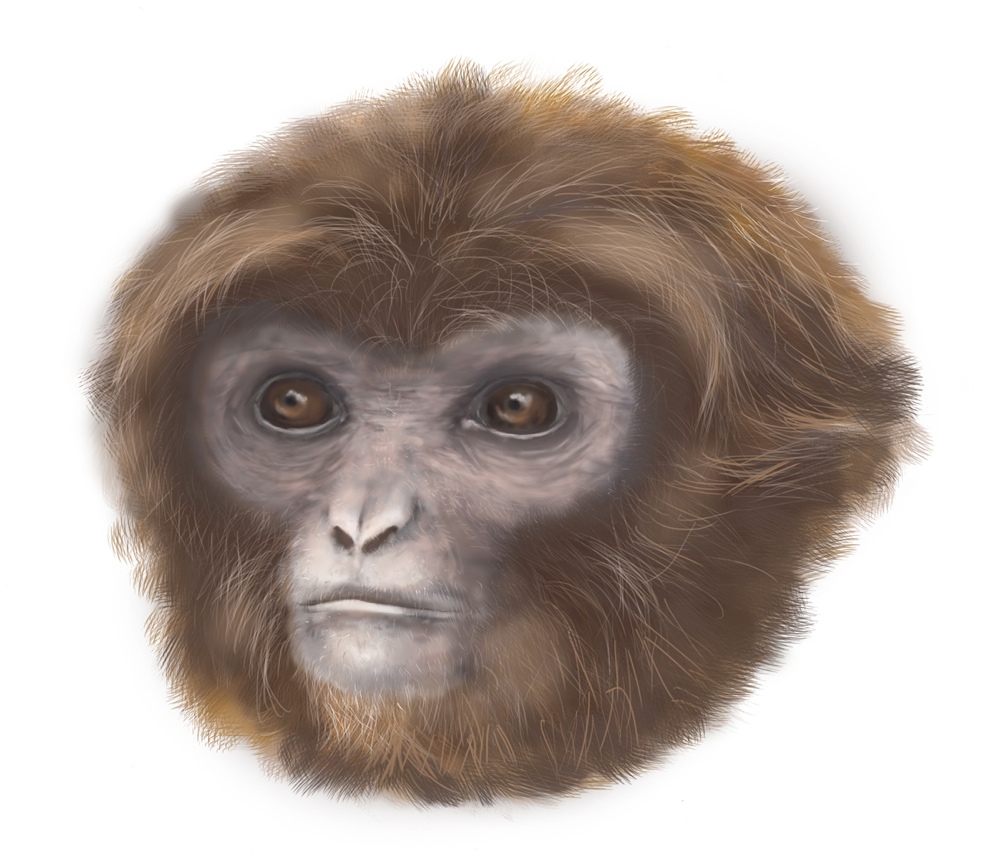 The fossil of a small primate with "goggle" eyes that strode atop tree branches, snagging snacks of fruit, suggests the last common ancestor of all apes might have been less like humans' closest living relatives than often thought, researchers say.

This discovery could shed light on what the last common ancestor of all apes and humans might have been like, scientists added.

For instance, the newfound species was a small-bodied ape that would have weighed about 8.8 to 11 lbs. (4 to 5 kilograms), making it similar in size to the smallest living gibbons. [See Images of the Little Primate from Spain]

"The last common ancestor of apes and humans might have been, in several respects, more gibbonlike than previously thought," said study lead author David Alba, a paleobiologist at the Catalan Institute of Paleontology in Barcelona, Spain.

Humans, monkeys and apes are all primates. Monkeys have tails, while apes do not.

There are two kinds of apes: small-bodied, lesser apes known as gibbons and larger-bodied, great apes such as gorillas, chimpanzees and orangutans. The great apes are the closest living relatives of humans.

The lesser apes, great apes and humans make up a group known as hominoids. Somewhat confusingly, great apes and humans are together known as hominids. The lesser apes diverged from the larger-bodied hominids by about 17 million years ago, in the middle of the Miocene epoch, which lasted from about 23 million to 5 million years ago.

Previous research suggested the last common ancestor of all living hominoids more closely resembled great apes than it did the lesser apes. All confirmed fossil hominoids found so far were large-bodied, suggesting that lesser apes are a dwarf lineage of great apes.

Now, the 11.6-million-year-old fossil ape newly discovered in Spain suggests the last common ancestor of all living hominoids may have been less like great apes than previously thought.

Alba and his colleagues found the primate in 2011 during the enlargement of a landfill in Catalonia, a province in Barcelona.

"The excavation of thousands of tons of Miocene sediments by heavy machinery would have inevitably led to the destruction of thousands of fossils if paleontologists had not been controlling the activity of the diggers," Alba told Live Science. "The Can Mata landfill is one of the most interesting areas worldwide with regard to the study of hominoid evolution in the Miocene. We are sure that other extraordinary fossils await to be discovered there."

They named it Pliobates cataloniae. "Pliobates" is a combination ofPliopithecus, which means "more ape," and Hylobates, which means "the one who walks or haunts," a reference both to small-bodied primates known as pliopithecoids and living gibbons known as hylobatids. "Cataloniae" refers to the location of the fossil find.

The partial skeleton is composed of 70 bones and bone fragments, including most of the skull and teeth as well as a considerable portion of the left arm, including several parts of the elbow and wrist joints.

"Partial skeletons are quite rare in the primate fossil record," Alba said.

The scientists have nicknamed the specimen "Laia." The name is a diminutive version of "Eulalia," the patron saint of Barcelona, which literally means "well spoken," a reference to the new knowledge this fossil brings to science.

Based on its anatomy, P. cataloniae was a tree-dwelling primate, with limbs designed for walking on the tops of branches as well as hanging below them. Its elbow and wrist could rotate considerably to allow cautious, slow climbing, although its elbow lacked a ridge of bone that helps living apes stabilize their elbow joints while hanging by their arms, a feature that distinguishes living apes from other primates.

Back when P. cataloniae was alive, the site where it was found was a forest with a warm and wet climate and some rivers or lakes nearby. This location hosted a rich diversity of animals, such as the nearly 80 species of mammals identified to date at the area: rodents, horses, rhinos, deer, proboscideans distantly related to modern elephants and carnivores sometimes known as false saber-toothed cats. Scratches and pits on P. cataloniae's teeth suggest it ate fruit.

In many anatomical features, such as the ears and teeth, P. cataloniaeresembles primitive primates dating from before the split between hominoids and their closest monkey relatives. However, it also shares a number of facial features with living gibbons, such as gogglelike rims in the eye sockets. This suggests that primitive hominoids resembled lesser apes more than previously thought.

"Pliobates enlightens our understanding of how this ancestor would have looked, in particular by suggesting that in several respects, such as skull shape or body size, it would have been more similar to gibbons than previously thought," Alba said.

The scientists detailed their findings in the Oct. 30 issue of the journal Science.