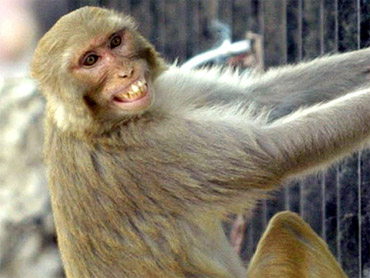 A newborn baby died after being snatched by a monkey from her family's living room in central Malaysia, an official said Thursday.

The body of the four-day-old girl was found outside the family's home in Negri Sembilan state Wednesday, said a Wildlife Department official who spoke on condition of anonymity, citing protocol.

The monkey took the infant to the roof of the single-story house and then dropped her after possibly mistaking her for food, the official said. The girl, who had been left alone in the room, had bite marks on her neck and face.

Wildlife authorities fatally shot the monkey, which remained near the house and might have been attracted by a female pet monkey the family kept in a cage, the official said.

Malaysian authorities have battled a booming macaque population in cities where they sometimes attack people and raid food supplies. However, plans to catch them and export them for food and scientific research were scrapped in 2008 after officials discovered most of them were riddled with disease.