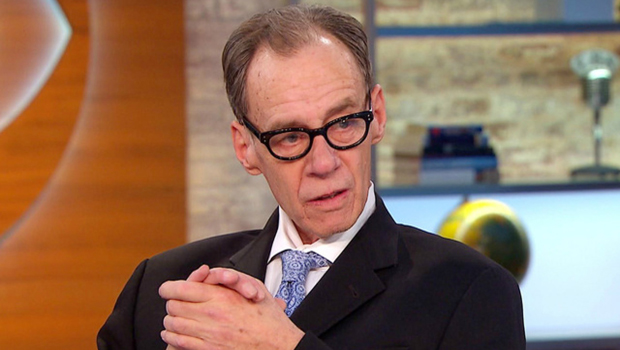 Carr wrote the Media Equation column in the Monday business section of the Times, focusing on how media relates to business, culture, and government.

The newspaper said Carr collapsed at his Times office and died at St. Luke's Roosevelt Hospital.

Times publisher Arthur Sulzberger, Jr. released a statement saying Carr "was one of the most gifted journalists who has ever worked at The New York Times. He combined formidable talent as a reporter with acute judgement to become an indispensable guide to modern media.

"But his friends at The Times and beyond will remember him as a unique human being - full of life and energy, funny, loyal and lovable. An irreplaceable talent, he will be missed by everyone who works for The Times and everyone who reads it."

Just hours before his death he had moderated a "Times Talks" conversation with Edward Snowden, director Laura Poitras and journalist Glenn Greenwald about the documentary "Citizenfour," which chronicles Snowden's leak of National Security Agency documents. Carr, engaged as always, drew them out with pointed questions and wry observations to speak candidly about the film.

On Wednesday, Carr had appeared on CBS This Morning and CBSN to discuss the suspension of NBC News anchor Brian Williams and Jon Stewart's retirement from "The Daily Show."

Carr, who lived in Montclair, New Jersey, with his wife and their daughter and had two other children, also wrote "The Night of the Gun," a 2008 memoir about addiction and recovery.

The book, published by Simon and Schuster, traces Carr's rise from cocaine addict to single dad raising twin girls to sobered-up media columnist for the Times.

Carr said he wrote up a book proposal "on a dare to myself" in two days. After an agent sold the idea, Carr ended up interviewing about 60 people and working on the book for three years. He took the transcribed interviews, numerous documents and pictures to his family's cabin in the Adirondacks, where he wrote the book.

Comedian and actor Tom Arnold, who started his standup career in Minneapolis, was pals with Carr on the city's party circuit in the 1980s and is featured in the book. In a 2008 interview, Arnold called Carr's story redemptive.

"He did some outrageous things, and he did some horrible things, and yet that's not who he is. ... But that's what drugs will do to you," Arnold said. "He survived, and people can survive."

In the book, Carr doesn't flinch from describing his arrests (including one for punching a taxi driver), his trips to rehab (five times) and his bout with Hodgkin's lymphoma, a cancer of the lymphatic system.

Carr's rise in journalism paralleled his recovery from drug addiction. After stints helming the Twin Cities Reader, a Minneapolis-based alternative weekly, and the Washington City Paper, an alternative weekly in D.C., Carr went on to gigs writing for Inside.com, an online media news website co-founded by Spy magazine co-founder Kurt Andersen, and New York and The Atlantic Monthly magazines before landing at The New York Times.

"I've always thought it (the Times) was a magnificent thing to read and look at," Carr once said. "I just never pictured the likes of me working here."

Last year, Carr began teaching a Boston University class that explored the creative business models to support digital journalism. It was among the first professorships dedicated to evaluating how media organizations can sustain themselves financially as readers and advertisers migrate to digital platforms, a crisis that has doomed some news organizations and threatens the viability of others.

Carr had written about the issue extensively.

"I think a lot of journalism education that is going on is broadly not preparing kids for the world that they are stepping into," Carr told The Boston Globe.