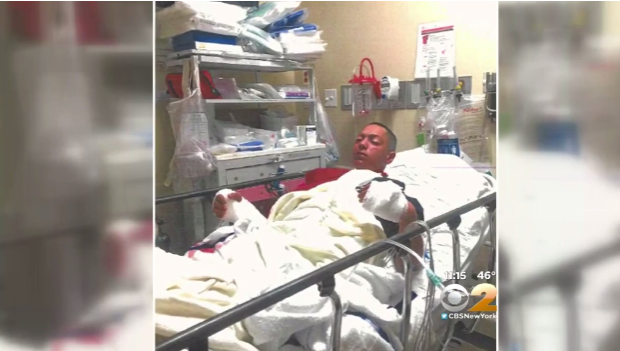 A teenage boy suffered serious injuries when an e-cigarette vaporizer he was holding blew up in his face.

The 14-year-old, who spent five days in the hospital, was left with permanent injuries after his attorney said he was maimed and blinded by an exploding e-cigarette or vape pen, CBS New York reports.

"I was shocked. I was bleeding out of my nose," Leor Domatov said.

Domatov said he was at the Kings Plaza Shopping Center in Brooklyn with friends when they approached a kiosk called Plaza Vapes.

"The guy was showing me different products of the vaporizers. He connected one of the vaporizers to the battery at the store," he said. "When he gave it to me to hold, it exploded in my hands and my face."

Domatov now wears sunglasses after the explosion sent shrapnel flying into his eyes.

"My left eye, I can't see anything right now cause I got a cut through my cornea, and in my right eye I have a little bit of vision," he said.

At first, Domatov wasn't sure what had happened. Then he realized he was bleeding.

Domatov's attorney Marc Freund intends to sue both the shopping center and the kiosk.

"They don't ask him for any ID, nothing, and they're showing different types of products. There are no signs up that reflect the New York state and city law. It's illegal to sell these products to anyone under the age of 21," he said.

The kiosk now has a sign posted that reads, "Must be 21 to purchase any product, we ID all."

Freund claims the notice went up after the incident.

The corporate management offices for Kings Plaza did not reply to a request for comment. The kiosk worker there on Thursday said he could not speak to the incident or provide a phone number for the manager.

This isn't the first report of e-cigarettes malfunctioning and injuring people.

In January, an Orange County, California, teen suffered first- and second-degree burns when an e-cigarette exploded in his pocket.

A man from Colorado Springs was severely injured in November when an e-cigarette exploded in his face, leaving him with a broken neck, facial fractures, burns to his mouth, and shattered teeth.

And last spring, CBS Los Angeles reported that a Santa Ana man was injured after his e-cigarette blew up in his hands. The explosion sent half of the device into the ceiling, starting a fire at his apartment.

Last year, the federal government banned e-cigarettes from checked luggage on aircraft because of the potential fire hazard. The Department of Transportation said it had reports of least 26 incidents since 2009 in which e-cigarettes had caused explosions or fires.