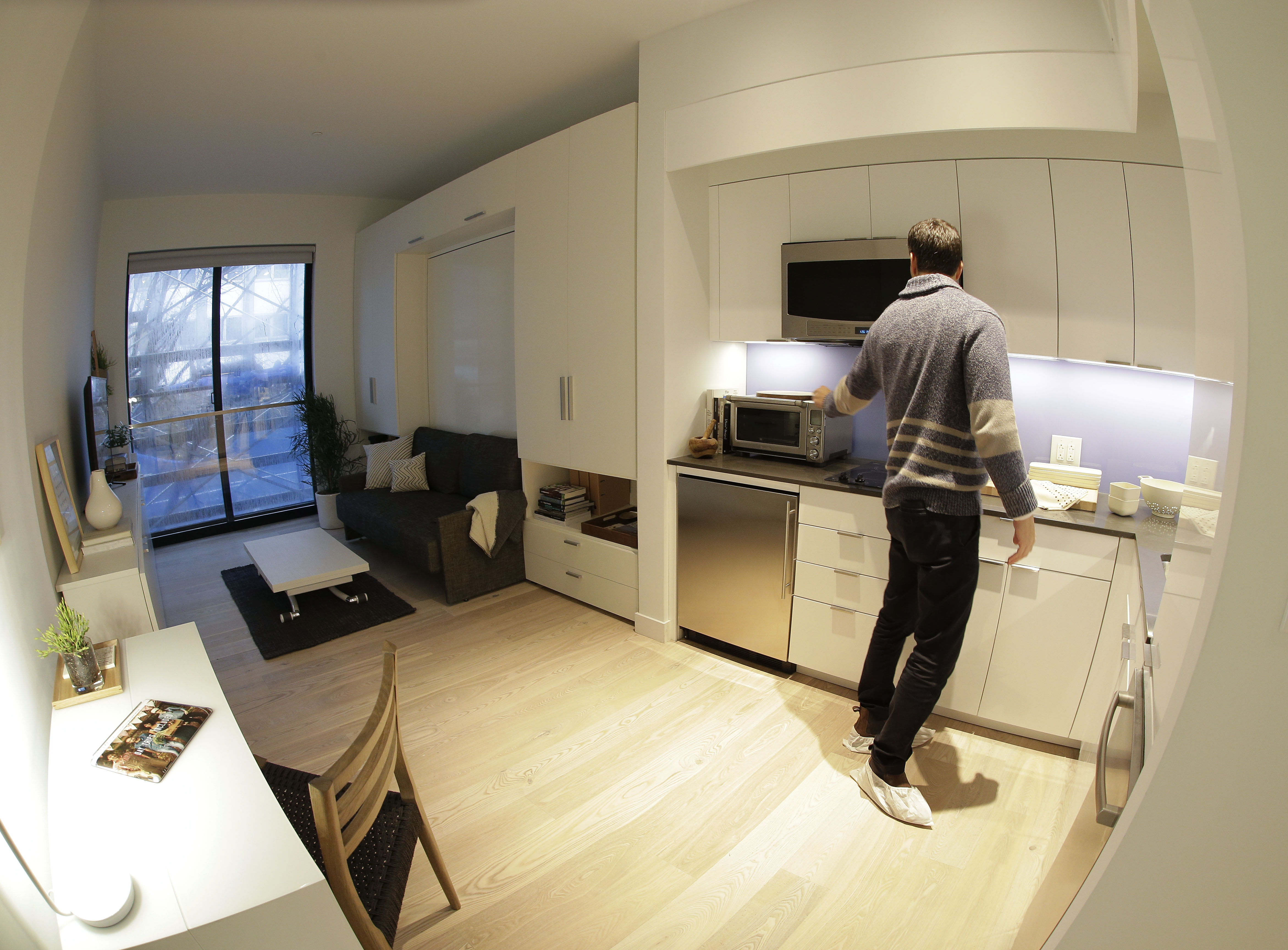 It's micro-living in the nation's biggest city, and New Yorkers could be seeing more of it. Planning officials are proposing to end a limit on how small apartments can be, opening the door for more "micro-apartments" that advocates see as affordable adaptations to a growing population of single people. Critics fear a turn back toward the city's tenement past and question whether less space will really mean less expensive.

At Carmel Place, the Manhattan building that marks the city's first experiment in decades with building super-small dwellings, the pitch is that little can be just enough.

Due to open early next year, Carmel Place features 55 apartments ranging from 265 to 360 square feet. By comparison, a typical one-car garage can be about 200 square feet.

As an experimental project, Carmel Place got city land and a waiver from New York's 400-square-foot minimum on new apartments, set in 1987. A proposed elimination of that minimum would allow smaller studios in buildings with a mix of apartment sizes, but entire micro-unit buildings would continue to need waivers.

"For us, it was really important to demonstrate how small space could be an enhancement to quality of life," said Christopher Bledsoe of Stage 3 Properties, which designed the interiors and amenities at Carmel Place.

Long, flat walls without columns maximize furniture-arranging options, although some units come furnished with fold-out wizardry, including a desk that expands into a 12-seater table and a retractable bed that pulls down tidily over a love seat. Developer Monadnock Construction and architecture firm nArchitects worked inch-by-inch -- sometimes by eighth-inch -- to meet such requirements as a wheelchair-accessible bathroom within the small space.

Forty percent of the units have rents set by affordable-housing programs topping out at around $1,500 a month, but market-rate ones rent for $2,650 to $3,150, roughly on par with many studios in the nearby Murray Hill neighborhood. About 20 people have applied and hundreds requested information for eight market-rate units so far, while over 60,000 have entered a lottery for the affordable ones.

Of course, tiny apartments in New York are not exactly new. Veteran appraiser Jonathan Miller estimates there are about 3,000 older apartments citywide that measure less than the 400-square-foot minimum. And some real estate agents say New York's young professionals are increasingly seeking small studios, willing to sacrifice space to be near work and away from roommates.

Cities from San Francisco to Boston have OK'd some micro-apartments in recent years, seeking to address housing squeezes in a nation where 28 percent of households are people living alone, up from 13 percent in 1960. It's higher in some cities including New York, where about a third of households are single people.

"People are spending $1,800 a month renting a room that's 10-by-10 and living with strangers that they met on Craigslist" in New York, said Sarah Watson, deputy director of the Citizens Housing Planning Council, an advocacy group.

"It just, on some level, is offensive: The only way we can manage to house people is to stick them in a closet," says state Assemblywoman Deborah Glick, a Manhattan Democrat who knows the limits of living small herself.

She and her spouse live in an apartment that Glick says measures a bit over 400 square feet. But they moved in together only after acquiring a more spacious weekend home.

"There was no way two lives could reasonably exist in the space that we have," Glick said. "We get along extremely well, but we do have a safety valve."