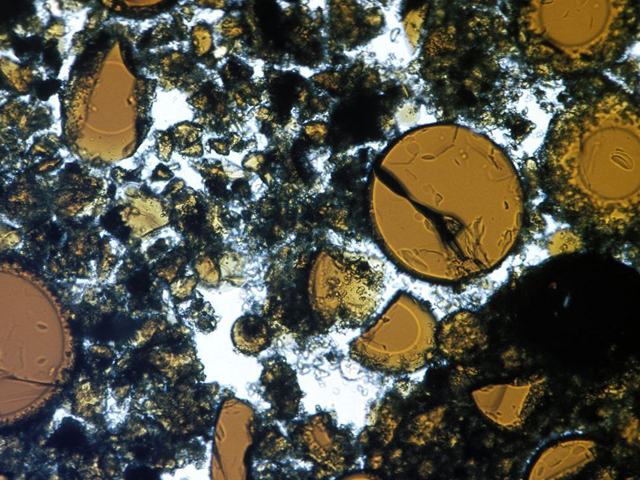 Scientists studying samples of volcanic glass from the Moon have made a startling discovery: there’s more water in them than was once thought. A lot more water. Not enough to go swimming or anything like that, but certainly enough to have affected the Moon’s geologic history, and potentially profoundly impact (haha — see below) our ideas of how the Moon formed.

The scientists looked at glass created in volcanic fire fountains, eruptions billions of years ago that left tiny (roughly the diameter of a human hair) grains of colored glass on the surface. These lay there for quite some time until 1972, when they were spotted by geologist Harrison Schmitt, who happened to be standing on the Moon at the time as part of Apollo 17. He brought them back to Earth for study.

In the ensuing decades technology improved quite a bit, and figuring out the contents of the glass beads has become a lot more accurate. In this new research, the scientists found (in 2008, actually, but their results are now confirmed) that the beads have a water content of about 750 parts per million, roughly equivalent to what you’d find in magma in the Earth’s upper mantle. That’s very surprising; many of the rocks on the Moon’s surface are very dry*, which for years has led scientists to assume the Moon itself was very dry.

Even with subsurface water being found all over the Moon, it’s still surprising to see this water in the beads. Why?

Because the surface water is thought to have come from space in the form of comet impacts. Comets have lots of water, and over billions of years have hit the Moon countless times. But dig down a ways and the rocks were expected to be drier. This is turning out not to be the case, since these glass beads come from deep below the lunar surface and have so much water in them.

OK, so the Moon is wetter, which is nifty. Mind you, we’re not talking about potential geysers or subsurface lakes here; the amount of water we’re seeing here means you’d need to grind up a couple of cubic meters of this glass just to get enough water to drink with lunch. So what’s the big deal?

The important part here is that this has a huge effect on how we think the Moon formed. The current thinking is that shortly after the Earth itself formed, maybe 50 – 100 million years or so later, something the size of Mars came careening in and smacked into our new planet. It was a glancing blow, so a vast amount of material blasted out, away from the Earth, and into orbit around us. This stuff formed the Moon. This idea has a lot going for it: for example, it explains why the Moon is less dense than the Earth on average (by the time of impact, a lot of heavier stuff had settled to the Earth’s core, leaving the lower density materials near the surface to become the Moon).

It was also thought to take care of why the Moon is so dry compared to Earth: all the water boiled away in the impact. In fact, a lot of the more delicate (technically called volatile) materials would have been destroyed, explaining why we see so few volatiles on the Moon.

Except now we see more water. Clearly something is amiss. To be honest, I think the Giant Impact Hypothesis is still the best thing going — it really does have a lot of explanatory power — but it looks like we missed something. Maybe water was protected somehow in the impact, able to survive the blow. Perhaps our understanding of the timing of the impact is off, or maybe it’s something else entirely. The first order of business is to figure out if there is some add-on to the hypothesis that can explain this water. If not, then it’s time to make some hard choices.

I’ll note that in another study, using similar samples from Apollo 15, these same authors found that the ratio of deuterium to hydrogen in the lunar samples was indistinguishable from that of terrestrial water! That implies very strongly (to me at least) that the water on the Moon came from the Earth, or they both came from the same source. The D to H ratio changes across the solar system, meaning conditions in the early stages of the planets’ formations were different depending on their distance from the Sun. So this is yet another monkey in the wrench that must be dealt with.

Water plays a critical role in life on Earth, of course, but it also has a huge effect on geology. Volcanoes erupt very differently when water is involved (they tend to explode when wet), water affects the temperature of magma, and it even affects tectonics. Knowing just how much water is inside a planetary body is a key insight into its history. And apparently we’re not totally sure of even our nearest neighbor!

Clearly, we need more samples from the Moon, and from other worlds as well. Scientists are planning on doing just that, but such missions can be frightfully expensive and take decades to plan, build, and execute. This looks like a mystery that may take quite a while to unravel, but I’m hoping that we already have enough pieces to get us going in the right direction.