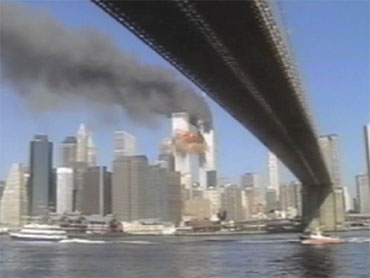 A camera in Brooklyn points through a chain-link fence at black smoke pouring from one skyscraper, while a plane pierces another. Papers fly through the sky; some of them end up in the filmmakers' hands.

That evening - Sept. 11, 2001 - another camera finds firefighters trudging through dust-caked streets, carrying their helmets or a spare pair of shoes. The spindly facade of the World Trade Center is before them.

The views of the terrorist attacks - one of the most recorded events of all time - are among hundreds of hours of amateur videos, images and stories gathered by the foundation building the memorial. The National Sept. 11 Memorial & Museum launched a Web site Thursday with its collection of citizen journalism of the tragedy and is appealing for more 9/11 stories from all over the world.

Watch: Video of firefighters trudging through streets on 9/11

"They say that 9/11 was the most digitally documented event of all time," said Alice Greenwald, director of the planned museum. "We're asking people everywhere to help us tell the story."

Visitors will be warned about graphic images - people jumping, human remains, planes piercing the towers - and will have a choice of whether to view them.

Organizers say one of the most difficult tasks they've faced is how to present the most sensitive material. Some of it, with the warnings, will be available online and at the museum, which is scheduled to open in three years.

One victim's family member said such images wouldn't keep him away.

Charles Wolf was in his Greenwich Village apartment when he saw an American Airlines jetliner pass overhead, then crash into the trade center - and his wife's office.

"I and many family members don't want revisionist history, and we don't want this sanitized," Wolf said. "It is very important that people remember what happened that day: This was civilization, people merely at work, caught up in religious fanaticism."

Construction of the museum is moving forward rapidly, said Joseph Daniels, president of the 9/11 Memorial Foundation. The museum and memorial will cover 8 acres, at the street level and underground, graced by 400 oak trees.

The last column pulled out from the rubble has been returned to bedrock. It will serve as a focal point, along with the so-called Survivors' Stairs used by people fleeing the towers.

The foundation has acquired 500 hours of video archives assembled by CameraPlanet, a private team of filmmakers who collected professional and amateur videos from the day and its aftermath.

They include a five-minute video shot in the streets of lower Manhattan on the evening of the attacks, with office stairwells filled with reams of paper and half-open offices with family pictures still inside.

A dust-covered Brooks Brothers logo is in one frame under shattered windows. What appears to be an airliner seat is strewn in the street. "God Bless America! Unity!" is scrawled in the dust of one window.

"Got that?" one videographer asks on the video showing the explosion of the second tower when it's hit by the jetliner.

"What kind of crazy person would .... kill themselves?" another asks as the camera points at the two towers.