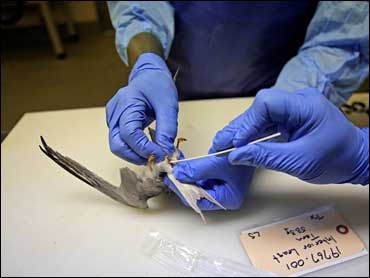 Scientists have a new test that can tell within four hours if a bird is possibly infected with bird flu — but it still will take about a week to know if that suspect case is really sick with the deadly Asian strain, Agriculture Secretary Mike Johanns said Tuesday.

Bird flu hasn't yet reached North America, but testing of migrating wild birds has begun in an attempt to catch it early if it does. There have been no worrisome discoveries yet, Johanns told The Associated Press.

Four hours also is how long it takes to get preliminary results in people infected with the H5N1 virus, Health and Human Services Secretary Mike Leavitt said in the joint interview. But if bird flu ever begins spreading easily among people, that's too long, he warned.

"If it occurs anywhere in the world, it's just a matter of weeks until it appears in the United States," Leavitt said, stressing U.S. preparations that include research into faster human tests for the disease as well as vaccines and treatments. Previously, officials have said that tests allowed them to tell within a day of testing whether a bird was possibly infected with bird flu.

Bird flu has killed at least 127 people worldwide since it began spreading in Asia in late 2003, and tens of millions of poultry and other birds have died of it or been destroyed to stem outbreaks. It is difficult for people to catch — most infections so far have been linked to close contact with infected birds or their droppings.

But experts fear the virus could mutate into a form easily spread between people, potentially sparking a worldwide outbreak.

It's considered likely that an infected bird eventually will wing its way to North America, perhaps mingling with native birds on breeding grounds in Alaska that then could bring H5N1 south to infect other birds.

An infected bird isn't a threat to the average American: "That will not be a crisis," Leavitt stressed.

Instead, agricculture officials will work closely with farmers to protect poultry from getting sick, destroying entire flocks if the disease appears, quarantining farms and ensuring a disease-free perimeter of about six miles, Johanns said.

The world got a scare last month when an Indonesian family apparently spread the virus among one another, killing at least six relatives and probably a seventh and sickening one more. There have been a handful of such in-family cases before, but this was the largest familial cluster ever counted. Genetic testing showed the virus hasn't mutated, and it didn't spread beyond blood relatives.

But Johanns and Leavitt said the situation illustrates the cultural difficulties in battling bird flu: how to educate impoverished families that the backyard chickens responsible for their livelihoods could sicken, even kill them.

In Cambodia, Leavitt said, a health minister told him it was "difficult to get farmers to think a few dead chickens are a serious problem" when 14,000 people there die of rabies in a given year.

Given such stark realities, what's the chance that health workers could contain a bird flu pandemic in its country of origin?

"We'll do all we can to help other nations," he said. But, "the chance of actually being there when the spark happens so you control it is very low."