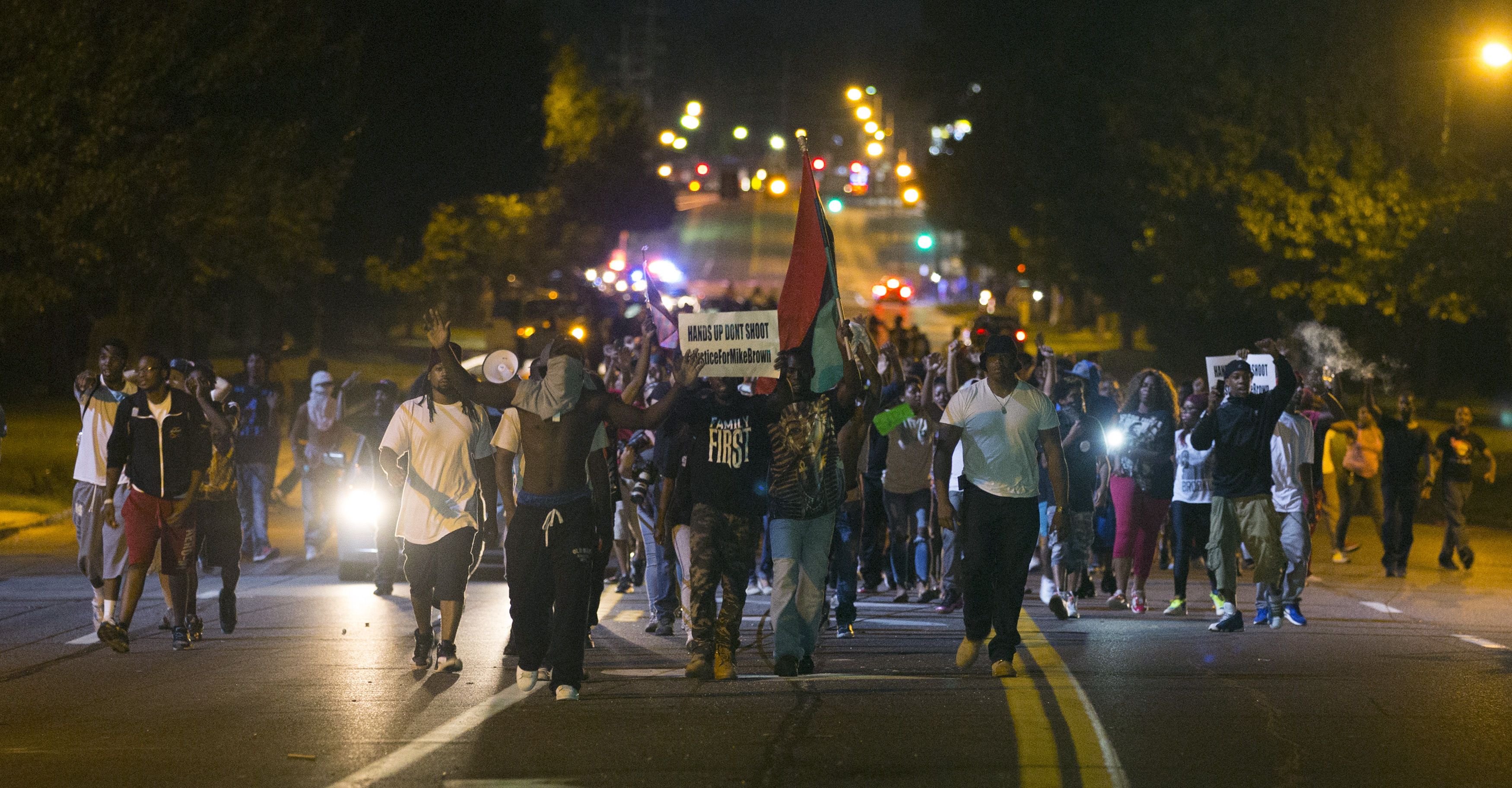 When they arrived, they found more than two dozen suspects fleeing on foot, Schellman said.

At one point, an officer confronted a suspect who pulled a handgun on the officer, according to the police spokesman.

"In fear for his life, the officer shot the subject," Schellman continued. He was taken to a hospital in critical condition. The suspect's handgun was recovered at the scene.

Separately, said Schellman, one person was injured in a drive-by shooting in Ferguson early Wednesday.

He said the incident involved several males in a black sedan, and a female was shot once in the head. He said she was taken to a hospital with injuries that did not appear life-threatening.

Schellman said the shooting occurred in the same vicinity as the protests over the death of 18-year-old Michael Brown.

Meanwhile, the Rev. Al Sharpton, Brown's family and others pressed police Tuesday to release the name of the officer who shot Brown, an unarmed black teenager, and he pleaded for calm after two nights of violent disturbances over Brown's death.

Ferguson Mayor James Knowles said the name of the officer will not be released due to fears for his safety, reports CBS News correspondent Mark Strassman.

"This officer has been receiving threats even though his name is not even known," Knowles said.

Police Chief Tom Jackson also said he had decided against releasing the officer's name, adding it could be weeks before they do so.

Jackson said there have been cyberattacks against the city's website, but that won't compel him to release the officers name. An anonymous global group of hackers had pledged to create mischief with Ferguson's city computers if the name wasn't released.

The officer has been with the force for about six years and was on a routine patrol when he encountered the two young men, Jackson said.

Police have not disclosed the race of the officer, but witnesses said he was white. Brown was black.

The mayor of Ferguson said the city has never before faced a racial divide, but acknowledged its police department can improve its recruitment of minority officers. According to the 2010 census, about two-thirds of Ferguson's 22,000 are black, but just three of the 53 members of the town's police department are black.

There were more protests in Ferguson Tuesday night into early Wednesday, but they didn't turn violent, witnesses said.

At one point, police used tear gas to disperse a crowd, reports the St. Louis Post-Dispatch.

Investigators have released few details of Brown's shooting, saying only that a scuffle unfolded after the officer asked Brown and another teen to get out of the street. At some point, the officer's weapon fired inside a patrol car, police said.

"The local authorities have put themselves in a position - hiding names and not being transparent - where people will not trust anything but an objective investigation," Sharpton said during a news conference in St. Louis at which he was joined by Brown's parents.

He also echoed pleas for peaceful protests by the NAACP and Brown's father, Michael Brown Sr., who told the crowd, "I need all of us to come together and do this right. ... No violence."

President Obama also urged calm, saying people must comfort each other "in a way that heals, not in a way that wounds." Mr. Obama called Brown's death "heartbreaking."

Missouri Gov. Jay Nixon, whose appearance was unannounced, told a standing-room only crowd at a community forum Tuesday night that the shooting feels "like an old wound torn fresh" in a nation still struggling with race relations.

KMOV said Nixon didn't answer reporters' questions about whether he'd call out the National Guard if the civil unrest resumed in Ferguson.

The forum, held at a church, was organized as an alternative response to two nights of unrest in which crowds burned stores, vandalized vehicles, assaulted reporters and taunted officers. Ferguson's mayor and police chief also attended the meeting, and were welcomed with applause.

The fullest account of Brown's death so far has come from Dorian Johnson, who said he was walking home from a convenience store with Brown when they were approached by an officer in a squad car who, using expletives, ordered them to move to the sidewalk.

In the hours after the shooting, Johnson told news crews that he and Brown had kept walking and explained to the officer they were near their destination. The officer then reversed his car "to where it almost hit us."

When the officer opened fire, Brown was hit and started to bleed, Johnson said. Johnson ran to hide behind a car.

Brown "kept running, and he told me to keep running because he feared for me, too," Johnson said.

Johnson said the officer pursued Brown with his weapon drawn and fired again.

When Brown felt that shot, he turned around and put his hands in the air and started to get down on the ground. But the officer kept firing, Johnson said.

"And my friend died. He didn't say anything to him. He just stood over and he's shooting."

Friends and relatives have described Brown as a non-violent kid who was otherwise quiet and respectful.

Another witness, Phillip Walker, told the AP he was on the porch of an apartment complex overlooking the scene when he saw a white officer with Brown, who was "giving up in the sense of raising his arms and being subdued." Walker said the officer then "stood over him and shot him."

Police have said there is no security or police video of the confrontation.

St. Louis County police are leading the investigation into Brown's death, and the Federal Aviation Administration agreed to order flight restrictions over Ferguson until Monday to give police helicopters unfettered access to that airspace. Those restrictions were lifted Tuesday.