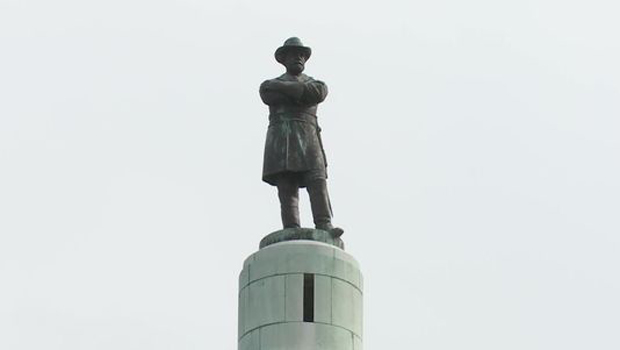 NEW ORLEANS -- New Orleans' leaders on Thursday made a sweeping move to break with the city's Confederate past when the City Council voted to remove prominent Confederate monuments along some of its busiest streets.

The council's 6-1 vote allows the city to remove four monuments, including a towering statue of Confederate Gen. Robert E. Lee that has stood at the center of a traffic circle for 131 years.

It was an emotional meeting -- often interrupted by heckling -- infused with references to slavery, lynchings and racism, as well as the pleas of those who opposed removing the monuments to not "rewrite history."

City Council President Jason Williams called the vote a symbolic severing of an "umbilical cord" tying the city to the offensive legacy of the Confederacy and the era of Jim Crow laws.

"If anybody wins here, it will be the South, because it is finally rising," Williams, who is African-American, said.

She lamented what she called a rush to take the monuments down without adequate consideration of their historic value and meaning to many in New Orleans.

Fixing historic injustice is "a lot harder work than removing monuments," she said, even as many in the packed council chambers jeered her.

She said the issue was dividing the city, not uniting it. "I think all we will be left with is pain and division."

New Orleans Mayor Mitch Landrieu signed the ordinance into law late Thursday. He said the process to remove the monuments will begin within days by finding a contractor to take them down.

The decision came after months of impassioned debate. CBS affiliate WWL-TV reported lawsuits were expected to be filed to block the monuments' removal.

An anonymous donor has volunteered to pay the estimated $144,000 to remove the monuments, WWL-TV said.

Anti-Confederate sentiment has grown since then around the country, along with protests against police mistreatment, as embodied by the Black Lives Matter movement.

Before Thursday's vote, Landrieu told the council and residents who gathered on both sides of the issue that for New Orleans to move forward, "we must reckon with our past."

The meeting was lively and sometimes disorderly.

The Rev. Shawn Anglim, a Methodist pastor, is among clergy who have spoken out in favor of taking down the monuments. Anglim told those gathered Thursday to "do the right thing."

Activist Malcolm Suber called the monuments "products of the Jim Crow era, an era when blacks were hunted and persecuted." Others said they want the council to go even further and change street names associated with "white supremacy."

The most imposing of the monuments the council has voted to strike from the cityscape has had a commanding position over St. Charles Avenue since 1884: A 16-foot-tall bronze statue of Lee stands atop a 60-foot-high Doric marble column, which itself rises over granite slabs on an earthen mound. Four sets of stone staircases, aligned with the major compass points, ascend the mound.

Above it all, the Virginian stands in his military uniform, with his arms folded and his gaze set firmly on the North -- the embodiment of the "Cult of the Lost Cause" southerners invoked to justify continued white power after the Civil War.

The council also voted to remove a bronze figure of the Confederate president that now stands at Canal Street and Jefferson Davis Parkway, and a more local hero, Pierre Gustave Toutant Beauregard, who straddles a prancing horse at the entrance to City Park. Gen. P.G.T. Beauregard was born in St. Bernard Parish, and commanded Confederate forces in the war's first battle.

The most controversial is an 1891 obelisk honoring the Crescent City White League's attempted insurrection, known as the Battle of Liberty Place. An inscription added in 1932 said the Yankees withdrew federal troops and "recognized white supremacy in the South" after the group challenged Louisiana's biracial government after the Civil War.

In 1993, these words were covered by a granite slab with a new inscription, saying the obelisk honors "Americans on both sides" who died and that the conflict "should teach us lessons for the future."

Before the vote, council member Head asked to keep the large monuments to Lee and Beauregard in place. But her motion received no support from the seven-person council.