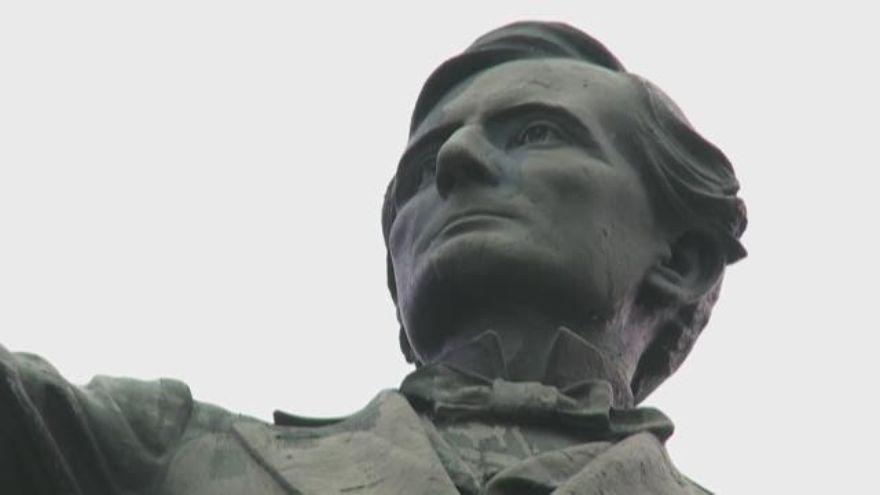 NEW ORLEANS -- New Orleans is poised to make a sweeping break with its Confederate past as city leaders decide whether to remove prominent monuments from some of its busiest streets.

With support from Mayor Mitch Landrieu, a majority on the City Council appears ready to take down four monuments, including a towering statue of Confederate Gen. Robert E. Lee. Their ordinance has sparked passionate responses for and against these symbols, and both sides will get one more say at a special council meeting before Thursday's vote.

If approved, this would be one of the most sweeping gestures yet by an American city to sever ties with Confederate history.

"This has never happened before," said Charles Kelly Barrow, commander-in-chief of the Sons of Confederate Veterans. "I've never heard of a city trying to sweep (away) all Confederate monuments."

Geographers have identified at least 872 parks, natural features, schools, streets and other locations named for major Confederate leaders in 44 states, according to a mapping project. Barrow said more than a thousand statues and monuments and countless plaques also honor Confederate battles and heroes.

What's happening in New Orleans reflects a new effort to rethink all this history: Confederate iconography is being questioned across the nation, and in some places falling from public view.

"It is a grand scale of symbolic rewriting of the landscape," said Derek Alderman, a geographer at the University of Tennessee who is mapping Confederate symbolism nationwide. "It certainly represents a wholesale re-questioning of the legitimacy of remembering the Confederacy so publicly."

Barrow said he and others will sue if necessary to keep the monuments where they are.

"I'm going to do everything in my power to take on these people," Barrow said. "I'm not going to let this happen under my administration."

Landrieu first proposed taking down these monuments after police said a white supremacist killed nine parishioners inside the African-American Emanuel AME Church in Charleston, South Carolina in June. "Supremacy may be a part of our past, but it should not be part of our future," he declared.

Anti-Confederate sentiment has grown since then around the country, along with protests against police mistreatment, as embodied by the Black Lives Matter movement.

In New Orleans, the mayor asked the council to take a closer look at monuments that have long been part of the city's landscape.

The most imposing has had a commanding position over St. Charles Avenue since 1884: A 16-foot-tall bronze statue of Lee stands atop a 60-foot-high Doric marble column, which itself rises over granite slabs on an earthen mound. Four sets of stone staircases, aligned with the major compass points, ascend the mound.

Above it all, the Virginian stands in his military uniform, with his arms folded and his gaze set firmly on the North -- the embodiment of the "Cult of the Lost Cause" southerners invoked to justify continued white power after the Civil War.

Also up for removal is a bronze figure of the Confederate president that now stands at Canal Street and Jefferson Davis Parkway, and a more local hero, Pierre Gustave Toutant Beauregard, who straddles a prancing horse at the entrance to City Park. Gen. P.G.T. Beauregard was born in St. Bernard Parish, and commanded Confederate forces at the war's first battle.

The most controversial is an 1891 obelisk honoring an attempted insurrection by the Crescent City White League known as the Battle of Liberty Place. An inscription added in 1932 said the Yankees withdrew federal troops and "recognized white supremacy in the South" after the group challenged Louisiana's biracial government after the Civil War.

In 1993, these words were covered by a granite slab with a new inscription, saying the obelisk honors "Americans on both sides" who died and that the conflict "should teach us lessons for the future."

"We agree with the mayor that the Liberty Place monument has no value that would justify retaining it, but the others are both historically and culturally significant," Batt, a former city councilman, told CBS affiliate WWL-TV. "Instead of focusing on removing these monuments, we believe the City should create new monuments to honor African-Americans whose contributions to our history and culture were as or more significant."

The city has estimated it will cost $144,000 to remove the monuments, and says an anonymous donor will pay that cost.

The shootings in Charleston have made these lessons take on new relevance, Alderman said.

"There are a lot of people making a direct connection between a white supremacy group and the effect on African-Americans," said the geographer, who's been tracking many examples of "a questioning of the authority that the Confederacy has been given on the landscape."

Popular culture, Alderman said, is trying to establish how to rewrite "American and Southern public memory in a way that makes room for both perspectives on heritage, and at the same time is fair and just to African-American perspectives that historically have not been recognized."

The Memphis city council is trying something similar, voting in August to remove an equestrian statue of Gen. Nathan Bedford Forrest, who also traded slaves and led the Ku Klux Klan. Memphis even wants to remove the graves of Forrest and his wife, who lay buried under the statue.

Tennessee's historic preservation agency is weighing approval -- a process Louisiana could turn to as well.

Rather than removing this history, some advocate adding more monuments or markers, to promote a broader understanding of the past.

"Historic places, including the Confederate memorials in contention, can be catalysts for a necessary and worthwhile civic discussion," said Stephanie Meeks, president and CEO of the National Trust for Historic Preservation, in a statement. "We believe we actually need more historic sites properly interpreted, to help us contextualize and come to terms with this difficult past."