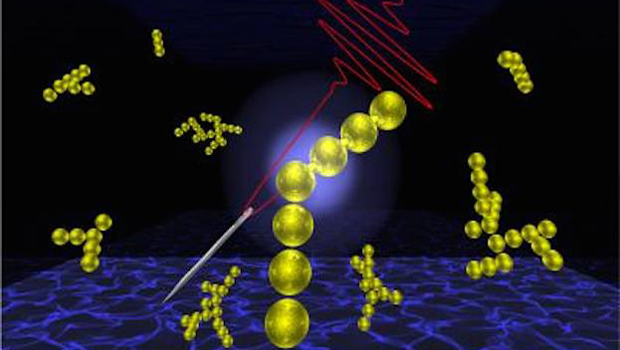 Invisibility cloaks may not be a reality yet, but a new method of building materials with light could one day be used to make these kinds of cloaking devices, researchers say.

The novel technique involves creating materials out of building blocks just a few billionths of a meter wide (about the width of a strand of DNA) that control the flow of light. These artificial "metamaterials" could bend light in such a way as to make an object invisible, according to the study published on July 28 in the journal Nature Communications.

Light that hits an object either gets absorbed or reflected, making the object visible to the human eye. But metamaterials manipulate light so that it makes the object "disappear" or look like something else. These materials could be used for everything from sensing (drugs or explosives, for example) to military stealth applications, the researchers said in a statement.

However, cloaking must first be done on a small scale before it can be used to mask larger devices. [6 Tales of Invisibility in Pop Culture]

A team of researchers from Cambridge University, in England, used unfocused laser light as "needles" to stitch together strings of gold nanoparticles in water. They stacked the strings on top of each other like LEGO bricks, which allowed them to produce more of these materials than is possible using current methods.

The researchers created the strings by using barrel-shaped molecules called cucurbiturils as spacers between the nanoparticles to keep them in a fixed position. Next, they needed to create a bridge between the particles so that electricity could flow through them. Creating this bridge is a challenge; you can't simply weld the particles together, because they would melt, the researchers said.

"It's about finding a way to control that bridge between the nanoparticles," study co-author Ventsislav Valev, a physicist at Cambridge University, said in a statement.

To create the strings, they focused the laser on the nanoparticles in their spaced-out configuration. The laser light created ripples of electrons on the surface of the material, called plasmons. The charged particles concentrated the light on atoms at the surface, bridging the nanoparticles. The team used ultrafast lasers to rapidly bridge billions of nanoparticles into strings.

Scientists have not achieved this amount of control over the dimensions of metamaterials before, the researchers said.

"This level of control opens up a wide range of potential practical applications," Valev said. No word on when you can get your invisibility cloak, though.