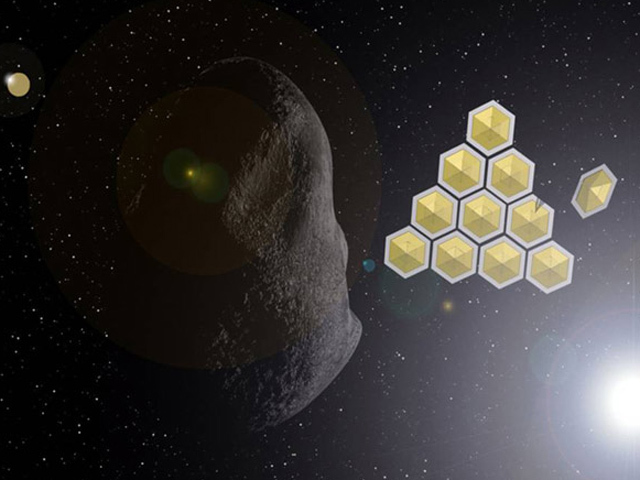 A huge asteroid's close approach to Earth tomorrow (Nov. 8) reinforces that we live in a cosmic shooting gallery, and we can't just sit around waiting to get hit again, experts say.

Asteroid 2005 YU55, which is the size of an aircraft carrier, will zip within the moon's orbit tomorrow, but it poses no danger of hitting us for the foreseeable future. Eventually, however, one of its big space rock cousins will barrel straight toward Earth, as asteroids have done millions of times throughout our planet's history.

If we want to avoid going the way of the dinosaurs, which were wiped out by an asteroid strike 65 million years ago, we're going to have to deflect a killer space rock someday, researchers say. Fortunately, we know how to do it.

"We have the capability -- physically, technically -- to protect the Earth from asteroid impacts," said former astronaut Rusty Schweickart, chairman of the B612 Foundation, a group dedicated to predicting and preventing catastrophic asteroid strikes. "We are now able to very slightly and subtly reshape the solar system in order to enhance human survival."

In fact, we have several different techniques at our disposal to nudge killer asteroids away from Earth. Here's a brief rundown of the possible arrows in our planetary defense quiver.

If researchers detect a potentially dangerous space rock in plenty of time, the best option may be to send a robotic probe out to rendezvous and ride along with it.

The spacecraft's modest gravity would exert a tug on the asteroid as the two cruise through space together. Over months or years, this "gravity tractor" method would pull the asteroid into a different, more benign orbit.

"You can get a very precise change in the orbit for the final part of the deflection using a technology of this kind," Schweickart said in late September, during a presentation at Caltech in Pasadena, Calif., called "Moving an Asteroid."

Humanity has already demonstrated the know-how to pull off such a mission. Multiple probes have met up with faraway asteroids in deep space, including NASA's Dawn spacecraft, which is currently orbiting the huge space rock Vesta.

And in 2005, the Japanese Hayabusa probe even plucked some pieces off the asteroid Itokawa, sending them back to Earth for analysis.

We could also be more aggressive with our asteroid rendezvous craft, relying on brute force rather than a gentle gravitational tug. That is, we could simply slam a robotic probe into the threatening space rock to change its orbit.

We know how to do this, too. In 2005, for example, NASA sent an impactor barreling into the comet Tempel 1 to determine the icy object's composition.

The impactor approach would not be as precise as the gravity tractor technique, Schweickart said, but it could still do the job.

There's also the possibility of blowing the asteroid to smithereens with a nuclear weapon. The nuclear option could come into play if the dangerous space rock is too big to knock around with a kinetic impactor,  but it would likely be a weapon of last resort.

For one thing, blasting an asteroid to bits might end up doing more harm than good, said fellow presentation panelist Bill Nye, executive director of the Planetary Society.

"Momentum is conserved," Nye said. "If you blow it up, then the whole giant spray of rocks is coming at the Earth instead of one."

The politics involved in mobilizing use of a nuke could also be a cause for concern, Schweickart said. It will likely be hard enough to convince the world to mount any sort of asteroid-deflection mission in time, and adding nuclear missiles to the equation would make things much stickier.

"The potential use of nuclear explosives for deflection cannot currently be ruled out," Schweickart said. "But it is an extremely low probability that they will be needed."

While we're pretty sure that gravity tractors and kinetic impactor probes would work, researchers are also looking into several other ideas. [Photos: Asteroids in Deep Space]

There's the "mirror bee" concept, for example, which would launch a swarm of small, mirror-bearing spacecraft to a dangerous asteroid. These mini-probes would aim reflected sunlight at one spot on the space rock, heating it up so much that rock is vaporized, creating propulsive jets.

"The reaction of that gas or material being ejected from the asteroid would nudge it off-course," Nye said.

The Planetary Society is helping fund research into mirror bees, Nye said. And while he said the concept isn't yet ready for deployment or demonstration, he stressed that it's not too far off, either.

Nye also floated another, more speculative idea. It might be possible to move an asteroid, he said, by wrapping it in reflective foil, like a giant baked potato. Photons from the sun might then nudge the space rock away from Earth, in much the same way they propel spacecraft equipped with solar sails.

"This might work, even if the thing is rotating," Nye said. "OK, make no promises. But it's something to invest in."

The biggest key to deflecting dangerous asteroids, researchers say, is detecting them with plenty of lead time to take appropriate action. We'd like to have a least a decade of notice, NASA scientists have said.

It'll take awhile, after all, to mobilize and launch a deflection mission, and for that mission to do its job, especially if we go the gravity tractor route.

We need to make sure we can rise to the challenge when a big, threatening asteroid shows up on our radar, Schweickart and Nye said. Civilization's very survival depends on it.

When Space Attacks: The 6 Craziest Meteor Impacts
Killer Asteroids: We're WISE to You Now!
5 Reasons to Care About Asteroids