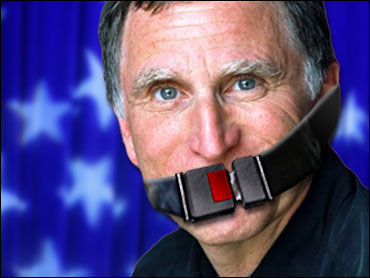 When I was a kid, I became intrigued by the state mottos that I saw on various license plates. Growing up in Chicago, I was used to seeing "Land of Lincoln," and that slogan seemed perfectly acceptable. I actually felt bad for the people of Oklahoma whose license plates bore the motto, "Oklahoma is OK." My feeling was that if you're going to brag about your state, then brag about it. Don't say it's just "OK." You don't see Texas plates saying, "Texas Is So-So." New Mexico's "Land of Enchantment" was alluring to a city kid, but New Hampshire's motto topped them all. The first time I saw "Live Free or Die" on a license plate, I knew that it had to be the best slogan of any state. I loved its defiant pride. But now, in the area of seat belts and safety, that spirit of "nobody's going to tell us what to do" just doesn't make sense.

Currently, New Hampshire is the only state that doesn't have a mandatory seat belt law. They do require that restraints be used for children and teenagers, but not for adults. Wednesday (May 31), their state senate is scheduled to vote on such a bill. The New Hampshire Senate Transportation and Interstate Committee voted three to two to recommend that the bill be killed. If it is, obviously some of the people of New Hampshire will also suffer that fate.

One member of the committee who voted against the bill, Bob Clegg, says, "I choose not to buckle, and I think it's baloney that the government would tell me that I have to, or else."

New Hampshire has the lowest rate of seat belt use in the country, 49 percent, according to the National Transportation Safety Board — no doubt an organization that Clegg and others consider a bunch of outsiders pushing "baloney." However, New Hampshire's own Safety Department says that last year 77 percent of fatal crashes in the state involved people who were not wearing seat belts.

So it's not surprising that many people in New Hampshire believe that seat belts save lives. But that doesn't mean that they think there should be a law requiring their use.

Some of them feel that a law in "stay out of my business" New Hampshire might backfire. Another committee member who voted against the bill, state senator Robert J. Letourneau, said that requiring people to do things breeds resentment, while encouraging them doesn't. So he and others are afraid that if there's a law "forcing" people to use seat belts, the people of New Hampshire will rebel and have the attitude of, "Nobody can tell me what I can do in my own car," and actually use seat belts less than if there were no law.

It seems to me that this attitude underestimates the people of New Hampshire. Any group that could come up with "Live Free or Die" is not stupid. They're not a bunch of immature adolescents who resent it when their parents say they have to do their homework before they go out, and then don't do their homework and sneak out. We're talking about mature, intelligent adults. Just to be defiant, do they speed up when they see a sign that says "School Zone?" Do they sell liquor to kids because they resent that there's a law against it? Do they go to work naked because they don't feel the government should tell them they have to wear clothes?

Some people believe, "If the only one I may hurt is me, why should the government be involved?" Proponents of seat belt laws point out that New Hampshire would get $3.7 million from the Federal government for enacting a seat belt bill, and the state would save an estimated $48 million in medical costs. That money's not "baloney."

Putting money aside, if you are a victim of an accident because you don't use a seat belt, you aren't the only one affected — what about the loved ones left behind? Should they have to suffer because you wanted the government to "mind its own business?"

Obviously, I'm hoping that common sense will prevail and that New Hampshire will join the rest of the nation and pass a seat belt bill. If not, I'm afraid that their motto might have to be changed to, "Live Free And Die."


Lloyd Garver has written for many television shows, ranging from "Sesame Street" to "Family Ties" to "Frasier." He has also read many books, some of them while in a car (but not while driving).