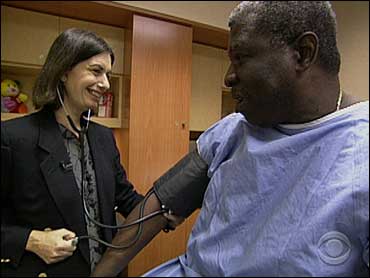 Nearly 24 million Americans are afflicted with diabetes, up more than 3 million in approximately two years. That adds up to more than $170 billion in yearly healthcare costs.

But for the first time, doctors have a game plan for how to help the 57 million Americans who are dangerously close to developing the disease, reports CBS News medical correspondent Dr. Jon Lapook.

"There is a whole group of patients that are in a so-called gray area of pre-diabetes where they're not perfectly normal, but they also are not frankly diabetic and those are the patients who we really need to focus on," said Dr. Jacqueline Salas Spiegel of New York-Presbyterian Hospital/Columbia University Medical Center.

About one-third of pre-diabetics will develop full-blown type 2 diabetes. And that's not the only danger.

"It can increase the risk of cardiovascular disease. That means heart attacks, strokes, as well as … circulatory problems," said Spiegel.

It may be really hard to get people to focus on something that hasn't happened to them yet. But diet and exercise really do work, reducing the progression of pre-diabetes to diabetes by 60 percent.