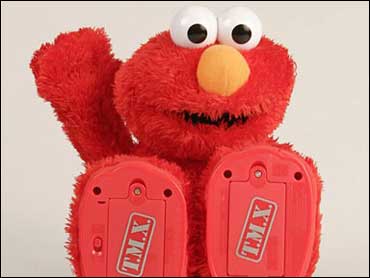 It's no wonder. That's what the toy's creators were saying for nearly two years before it became one of this year's hottest holiday sellers.

T.M.X. Elmo was developed under such secrecy that not even the sales force at manufacturer Fisher-Price Inc. knew exactly what they were selling before the toy debuted on national television Sept. 19.

"Would it fly?" buzzed some not privy to closed-door progress meetings sealed with code words and oaths of secrecy.

After all, the "X" in T.M.X. stands for extreme, not just the 10th anniversary of the original Tickle Me Elmo.

"You can imagine that there were some extremely wild guesses as to what the product was actually going to do," said David Allmark, general manager of Fisher-Price Friends, a unit of Fisher-Price and parent Mattel Inc. "It was extremely humorous."

T.M.X. Elmo, aimed at tots 18 months and up, doesn't fly, but the fuzzy red doll does perform some tricky moves for a plush toy, including falling down, kicking its legs, scooting across the floor on its back and rolling over while laughing, then getting back up again.

The advanced, two-motor mechanics are part of the reason T.M.X. Elmo was such a closely guarded secret, even within Fisher-Price. Only five or six people were in on the development; usually 10 times that number have a hand.

"We knew that this was very different and we wanted to retain secrecy to really make sure that we retained the intellectual property ... We didn't want to be copied in any way," Allmark said.

But the secrecy was also driven by a desire to do something different and big for the anniversary of the craze that had parents tripping over each other in stores to put Tickle Me Elmo under the Christmas tree.

When T.M.X. Elmo was unveiled on ABC's "Good Morning America," only about 50 people in the world had seen it.

East Aurora-based Fisher-Price relied on its reputation to win space in stores sight unseen. With the buzz building on the Internet and other media, Wal-Mart and Toys "R" Us took pre-orders from consumers. All the while, Fisher-Price pictured T.M.X. Elmo in mysterious silhouette on its Web site.

By the time the Sept. 19 debut arrived, parents were lining up outside stores to get one.

The result, Allmark said, was a holiday-like sales rush at what is traditionally a slow time, one that far exceeded expectations.

Ellie Bagli of Freeman Public Relations, which helped launch the toy, said the phenomenon reverberated throughout the retail industry.

"People were referring to it as the `Elmo effect' because it got people into the stores way ahead of what is normally seen as the kickoff to the holiday shopping season," she said.

"It definitely got the consumer thinking about the holiday a lot earlier than it normally would," agreed Jim Silver, editor-in-chief of Toy Wishes, a trade publication, "and it put people into the toy department in September in large masses. Normally you don't see that type of traffic until October-November."

The toy retails for $39.99, but was going for much more on eBay when the demand exceeded supply at the peak of the Christmas rush. Allmark said the company has been able to ramp up production.

On Monday, Toys "R" Us was advertising that each of its stores would have at least 50 T.M.X. Elmos when the doors opened for business.

The original 1996 Tickle Me Elmo giggled when its stomach was pressed. In the new version, the laughter and body movements grow more pronounced with three successive tickles. Every year since the original Tickle Me Elmo, Fisher-Price has come up with another incarnation with a new skill like doing the Hokey Pokey or playing rock 'n roll.