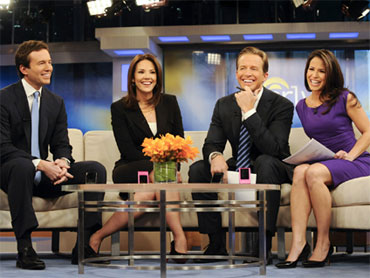 The anticipation was building, and so was the buzz.

Chris Wragge and Erica Hill assumed their roles as anchors, as did Jeff Glor as news anchor and Marysol Castro as weather anchor on Monday.

Right off the bat, Hill interviewed CBS News political analyst John Dickerson about prospects for the soon-to-convene 112th Congress, and Wragge questioned Michael Lohan about reports his daughter, Lindsay, is getting out of rehab anytime now. Glor did his first stint as news anchor, and Castro as weather anchor.

And Castro jumped right in -- literally -- to frigid ocean waters with the famous Polar Bears Club! She filed a piece on the experience. Wragge joked that when he pretended to scold her and said, "Go jump in the lake!," Castro took it too far!

Viewers got some insight into the anchors as people when they revealed their 2011 New Year's resolutions:

Special Coverage: Our New Anchor Team -- On the Job!

To get more of a sense of the new team, click on the video below:

Here's a highlights reel from their first "Early Show" broadcast:

The new anchors went on a multi-city tour across the U.S. to introduce themselves, stopping in Tampa, Raleigh, Houston, Los Angeles and San Diego.

They discussed the tour during Day One of the show Monday:

Have a look at photos from the tour: