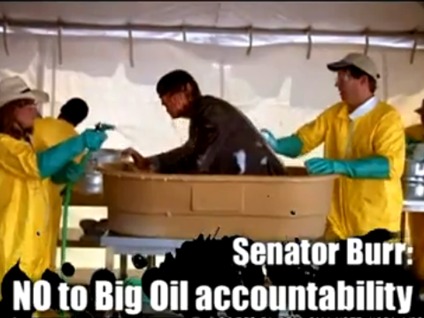 Just a day after senators came away from a meeting with President Obama at an impasse over what to do about energy reform, Votevets.org, with help from the Sierra Club, the Service Employees International Union and League of Conservation Voters, launched a new set of ads calling for the U.S. Senate to take action in passing energy and climate legislation.

Each 30-second spot (watch one above) begins with two people dressed in yellow coveralls and other clean-up gear pulling an oil drenched individual out from the ocean. After the oily man is identified as one of the aforementioned senators, the clip moves to shots of comedic attempts to clean him off.

During all this, a voiceover says the senator's "record is a little (clears throat) oily. Big oil has showered him with hundreds of thousands in campaign cash. And when it came to hold polluters accountable, Senator Burr (or, depending on the specific ad, Johanns or Nelson) voted no."

In conjunction with these segments, the organizations launched a set of complimentary ads thanking senators Claire McCaskill, D-Mo., and Harry Reid, D-Nev., for what they cast as efforts to hold oil companies accountable and create clean energy jobs.

The ads (watch one at left) feature Kevin Johnson, an Iraq War veteran. He tells viewers: "In Iraq, my battalion helped protect oil supplies from insurgent attack. Today, I'm helping to put up wind farms across America. This year, thousands of soldiers will return home, looking to get on with their lives. Senator McCaskill (or Reid) is making that a little easier - voting to hold oil companies accountable and creating thousands of clean energy jobs..."

In a press release issued today by Votevets.org, the organization called its latest ad campaign an attempt "to help ensure that the U.S. Senate takes decisive action on comprehensive energy and climate legislation this summer."

"Clean energy doesn't just protect the environment, it protects America, and puts people back to work," added Jon Soltz, an Iraq War veteran and Chairman of VoteVets.org. "Neither our national security nor our economy can survive the status quo, which sees us sending oil money to the same terrorists we're fighting, and surrendering jobs to foreign nations that are investing in clean energy technology right now. Constituents need to know where their Senators stand - with big oil, or with our troops and America."

Votevets.org also launched a similar ad campaign earlier this month which called the BP oil spill in the Gulf of Mexico a drain on national security.