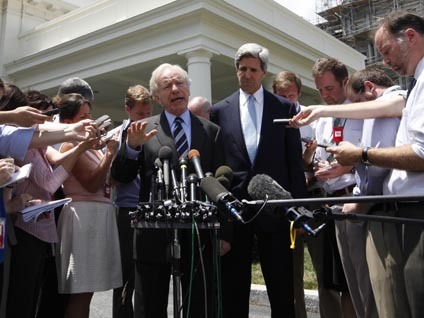 At a White House meeting with senators from both parties, President Obama failed to get a deal for passage of the energy/climate bill he wants.

Republicans emerged adamantly opposed so long as the measure would impose a tax on the use of fossil fuels.

"A cap-and-trade energy tax will not sell at this time," said Sen. Lisa Murkowski, R-Alaska,. "We've got to find a path that does not put an added burden on American taxpayers."

Senators John Kerry, D-Mass., and Joe Lieberman, I-Conn., both advocates of the president's bill, said they're willing to scale back the measure to get a compromise, but they insist a tax on the use of carbon fuels must remain part of the bill.

It's the president's hope that a tax on carbon fuels would provide an incentive to decrease their use and provide funds that would underwrite alternative fuel development.

"The time has come, once and for all, for this nation to fully embrace a clean energy future," said Mr. Obama in a speech earlier this month.

He said the only way to transition to clean energy "is by finally putting a price on carbon pollution."

Kerry said an energy bill without the tax won't accomplish the goal, adding that 10 energy bills have been enacted since the Nixon presidency and "none of them have done the job."

And Mr. Obama insists there's no other way.

"If we refuse to take into account the full costs of our fossil fuel addiction -- if we don't factor in the environmental costs and the national security costs and the true economic costs -- we will have missed our best chance to seize a clean energy future," said the president in his June 2nd speech at Carnegie Mellon University.

Republicans see an energy tax as an issue that could help them defeat Democrats in this year's mid-term elections.

But pull the tax, and Republicans are on board said Sen. Lamar Alexander, R-Tenn., after the meeting with the president.

"As long as we take a national energy tax off the table, there's no reason we can't have a clean energy bill," Alexander told reporters.