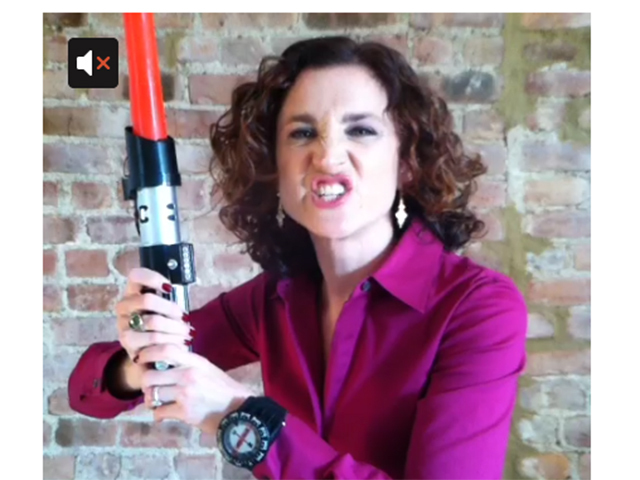 (MoneyWatch) Some things, it seems to me, don't need to be said out loud because they're so obvious. Don't show up to your job interview drunk or naked, for example. Don't goad your hiring manager into a fistfight. And here's a new should-be-obvious rule of thumb: Don't make a six-second Vine video and use it as a resume. Oh, wait, too late. Someone has done that, so I suppose it does need to be said out loud after all.

Here's what I'm talking about: Recently, journalist Dawn Siff created a Vine video that serves as a sort of resume; even though it's only six seconds long (the limit for Vine), she summarizes herself: "Idea machine Dawn Siff. Journalist. Strategist. Manager. Deadline Jedi." For each phrase, she changes the visuals, holding, variously, a light bulb, microphone, Rubik Cube, wristwatch and even a light saber.

Siff's Vine resume video is the latest bold gesture in a long history of outlandish resumes -- skywriters, singing telegrams and resumes in candy bar form are just a few that come to mind.

Such audacious resumes occasionally get you noticed but are just as likely to turn off HR departments and hiring managers. And there's perhaps nothing worse than having a copycat crazy resume -- Vine might have gotten Siff a lot of attention (and it did), but the next dozen people who make six-second resumes are already pitching a cliche.

Job site Glassdoor warns job seekers to avoid such antics and tone down resumes for better results. In a recent blog post, Glassdoor asserted that the traditional qualities are still what work best: Research the company, know the name of the hiring manager, and know the corporate culture. And then tailor your cover letter and resume based on that intelligence. As Glassdoor says:

While the flash-in-the-pan resume infographics may dazzle a news reporter, the reader that matters is the one who will choose your resume from the stack of thousands and ask you for the interview. That person is silently waiting for the most qualified candidate, not the most innovative sound-bite resume.

True words. Over the past 10 years as a hiring manager, I have seen some outlandish resumes and crazy interview stunts (ask me about the singing candidate sometime), but the ones that stand out are almost always the solidly professional, but eager and passionate, candidates.