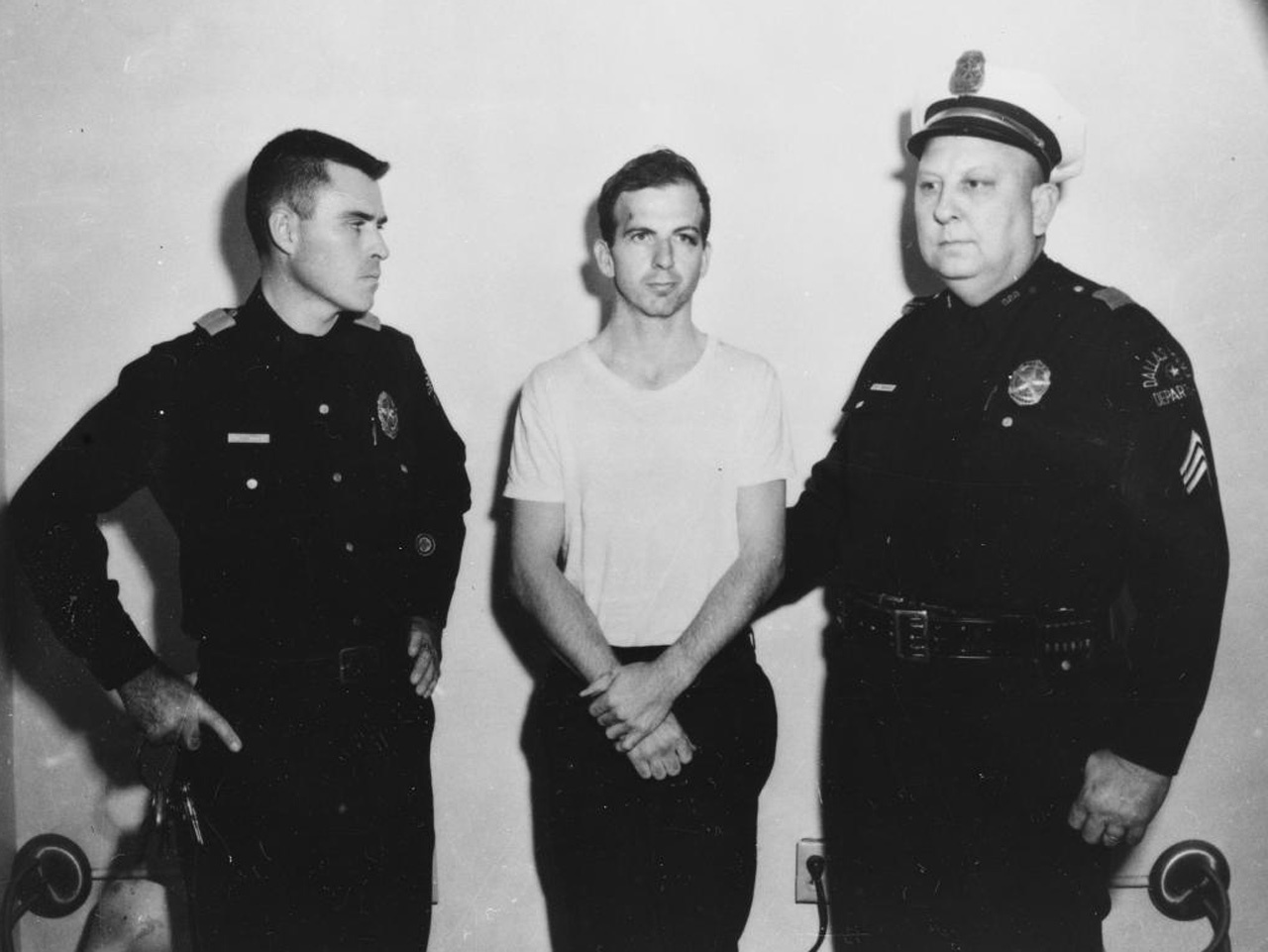 It has long been known that the Warren Commission, the blue ribbon panel of public officials appointed by former President Lyndon Johnson to investigate the assassination of former President John F. Kennedy, was flawed in ways that led to generations of conspiracy theories about what happened on Nov. 22, 1963. A forthcoming book from former New York Times reporter Philip Shenon digs into exactly what the commission got wrong, both by intentional concealment, or, in Shenon's view, extensive attempts by both the CIA and FBI to withhold just how much they knew about Kennedy assassin Lee Harvey Oswald in the weeks and months before he killed the president.

"In many ways, this book is an account of my discovery of how much of the truth about the Kennedy assassination has still not been told, and how much of the evidence about the president's murder was covered up or destroyed - shredded, incinerated, or erased - before it could reach the commission," Shenon writes in the prologue to A Cruel and Shocking Act: The Secret History of the Kennedy Assassination, which draws its title from the first sentence of the commission's report. "Senior officials at both the CIA and the FBI hid information from the panel, apparently in hopes of concealing just how much they had known about Lee Harvey Oswald and the threat that he posed."

Shenon was interviewed by Bob Schieffer on CBS' "Face the Nation" Sunday morning. He started the book in 2008, when one of the former staff lawyers from the commission contacted him to suggest he write a history of the Warren Commission like one he had just authored on the 9/11 Commission.

Much of the evidence Shenon includes in his book shows the amount of information about Oswald's time in Mexico that either never reached the Warren Commission investigators or was directly contradicted in reports by the CIA. One example is a June 1964 memo to the commission's lead investigator from J. Edgar Hoover, the FBI director at the time of Kennedy's assassination, in which Hoover wrote about a report from "our people in Mexico" that " [Oswald] stormed into the embassy, demanded the visa, and when it was refused to him, headed out saying, 'I'm going to kill Kennedy for this.'" (it was unclear to Hoover whether the embassy in question was the Cuban or Soviet embassy in Mexico City). The investigators told Shenon they were certain they had never seen the memo, which disappeared before it reached them and only turned up in the classified archives of the CIA years later.

Another previously unknown revelation in the book: Cuban dictator Fidel Castro submitted to questioning by the Warren Commission in a secret meeting with one of the commission's investigators, William Coleman, off the coast of Cuba.

Some of the FBI's other attempts to cover up their connections with Oswald have previously been revealed, such as the fact that Dallas-based FBI agent James Hosty had received and later destroyed a letter from Oswald protesting the FBI's questioning of Oswald's Russian-born wife, Marina. Under orders from his superior, Hosty destroyed the letter by ripping it into pieces, then flushing the pieces down the toilet at the Dallas FBI office, two days after the assassination when Oswald was killed by Jack Ruby.

Tom Johnson, a former press secretary to President Johnson who later became publisher of The Dallas Times Herald and The Los Angeles Times as well as a president of CNN, described Oswald's letter to the FBI as "a note threatening to blow up the Dallas office of the FBI, the building, if the agents did not cease trying to interview Oswald's wife Marina." Johnson confirmed the existence of the latter with former FBI director Clarence Kelley during his time at the Dallas Times Herald.

"The decision was made two days after the assassination to destroy this note. In truth, we'll never know exactly what was in that note, and its been described in different ways," Shenon told host Bob Schieffer. "The Warren Commission knew absolutely nothing about it.

Despite the intentional destruction of evidence, Kelley, who succeeded Hoover as the head of the agency, came to see Hosty as a victim when he later conducted a private search of the FBI's own files about the investigation. "He was convinced that if Hosty had been told everything that FBI headquarters knew about Oswald's Mexico trip, he would have alerted the Secret Service to the obvious threat that Oswald posed," Shenon writes. "The FBI, Kelley said, would have 'undoubtedly taken all necessary steps to neutralize Oswald.' And that was Kelley's larger conclusion - that President Kennedy's assassination could have been prevented, perhaps easily. "

Hosty's note from Oswald was one of the earliest pieces of evidence the commission might have examined that disappeared, but it was certainly not the only example. In the first chapter of the book, Shenon tells the story of how Navy pathologist James Humes threw his blood-stained notes from Kennedy's autopsy into the fire after he transcribed a fresh copy of the report. He said that he wanted to keep the documents from falling into the hands of "ghouls," and gave a similar rationale for ordering that the sheets that covered Kennedy's head wounds in Dallas be laundered during the autopsy.

The commission's investigators never even saw the photos and X-rays from the autopsy, which were in Robert Kennedy's custody at the Justice Department. The Kennedy family - and Earl Warren, the Chief Justice and chairman of the commission - decided to withhold the photos for fear that they would be leaked to the public and destroy the public image of Kennedy as a handsome young president instead of a crime victim with a gruesome bullet wound to his head.

"Repeatedly in the history of the Warren Commission you see the chief justice making decisions that were designed to protect the [Kennedy] legacy," Shenon said. The decision to block access to the autopsy photos caused "huge turmoil" among the commission's staff, he added.

Shenon also points to the CIA as having taken great steps to cover up their knowledge of Oswald's visit to Mexico City before the assassination. The book's prologue opens with the story of diplomat Charles William Thomas, a career State Department employee who uncovered details about Oswald's time in Mexico, including his affair with a Mexican woman who was a supporter of dictator Fidel Castro. The reports Thomas wrote to CIA Mexico City Station Chief Winston Scott with those details were ignored, as was the memo he sent to then-Secretary of State William P. Rogers when Thomas was forced out of the State Department in 1969. Thomas committed suicide in 1971.

"There is some evidence to suggest [Oswald] had a brief relationship with a young Mexican woman ho worked at the Cuban embassy in Mexico City," Shenon said on "Face the Nation." "The Warren Commission actually wanted to interview that woman but Chief Justice Warren made the decision she would not be interviewed because he said 'she was a communist and we don't interview communists.'"

A section of Scott's memoirs - which included details about the extent of the CIA's monitoring of Oswald in Mexico - was only declassified in the 1990s. The agency photographed Oswald outside of the Cuban and Soviet embassies in Mexico City, and recorded his phone calls while he was in Mexico, evidence that never reached the commission. Scott's memoirs also reveal that he thought there might have been a foreign conspiracy to kill Kennedy involving Oswald as a Communist agent, which contradicted what he told the Warren Commission.

"Scott told the Warren Commission that he did not believe there was a conspiracy, and apparently in his memoirs he says he exactly the opposite," Shenon said.

Shenon's book will be published on Oct. 29.