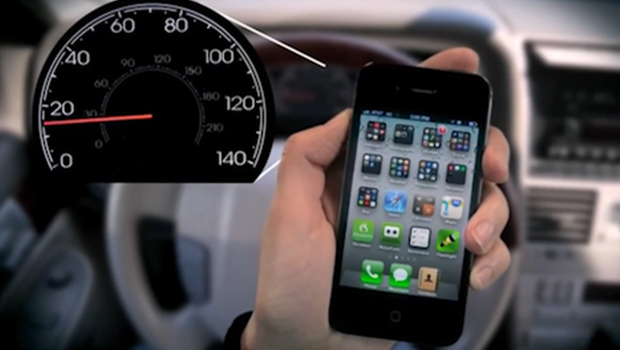 On June 28, 2007, Bailey Goodman was driving four of her friends to a family vacation house to celebrate their high school graduation. What should have been a weekend of revelry quickly turned tragic, as all five died in a horrendous head-on collision with a tractor trailer. In November 2013, a North Texas teen lost control of her car, fatally crashing into a rock wall. Earlier that year, an Anchorage teenager ran a red light, killing a 27-year-old mother of two.

Hailing from across the country, driving on different roads in different conditions, these teen drivers had one thing in common: according to phone records, they were texting at the wheel. The National Highway Traffic Safety Administration reports that more than 3,300 people nationwide were killed and 420,000 injured in distracted-driving related crashes in 2012.

The statistics have led 43 states and the District of Columbia to make it illegal to text while driving.

But laws haven't been enough to stop the offenders, leaving politicians and private business owners searching for better solutions. April is Distracted Driver Awareness month, and Secretary of Transportation Anthony Foxx recently launched a campaign to combat texting and driving.

A pair of entrepreneurial brothers in Florida went another route, creating an app called TXTShield that they say will get people to put down their phones when they're behind the wheel. In Kentucky, Mobile Life Solutions created a similar app called Text Limit.

"If you're driving, it doesn't matter whether you're going to the store or going to Georgia, they should not be texting," TXTShield co-founder Phil Stiles, 54, tells CBS News. "The goal is to change the behavior so when they start driving, they don't even look."

Both apps work with GPS to monitor the speed of the car.

With TXTShield, when a driver reaches a designated speed (they can choose from speeds between 10 and 40 miles per hour, in increments of 5), the app shuts down the phone's ability to text. Incoming texts do not show up on the home screen, and the app sends an automatic response to the person who texted the driver, letting them know that they are driving and will respond later.

"We have such a desire to stay connected, and tech has made it so easy. We almost feel guilty when we don't respond. Auto response - that gives you the peace of mind immediately," says Stiles.

Text Limit goes beyond texting, shutting down the ability to text, call and use the Internet when users reach a designated speed between 30 and 60 mph. The speed is set by an administrator (or parent), but emergency calls to 911 are never blocked.

In the model of TXTShield currently available in Google Play, administrators have password-protected control of the app. Parents can choose the settings on their teen drivers' phones; bosses can even block employees from texting while driving on the job. The administrators get a message if the app is uninstalled. Text Limit lets administrators control the app through a website, and sends a location update every 5 minutes.

In many ways, TXTShield and Text Limit are similar to AT&T drive mode, which comes standard with all AT&T Android and Blackberry phones. Why pay up to $3.99 for an app like TXTShield or $24.99 a year for Text Limit, when AT&T users can just flip a switch on a free setting? Because of that password protection, says Stiles. AT&T doesn't offer this shield. "The child can pick it up and disable it any time they want," he explains.

But password protection could also be a shortcoming with TXTShield, since it can't distinguish between drivers and passengers. The app currently activates anytime a user is in a car traveling at the designated speed, regardless of whether they're in the driver's seat or simply along for the ride.

So, if a user wants to text while sitting in the passenger seat, TXTShield has to be switched off before the car reaches the designated speed. At the moment, only administrators have control of that on/off switch.

How long will it be before parents tire of their teens complaining that they can't access their text messaging while riding along as passengers? It's possible they'll hand over passwords, or that savvy teens will figure out the passwords on their own.

And then, "if indeed they figured out how to get [to the admin screen], yes they could [just turn it off]," Stiles acknowledges.

Once they're turning it off as passengers, will they remember to turn it back on as drivers? As with earlier attempts, like AT&T's drive mode, this becomes an opt-in app.

Even people with the best intentions often stop using self-help apps. There are dozens of apps that claim to help users quit smoking, lose weight, stop yourself from drunk texting. They all have the best intentions, but it's up to the user to actually make the most of them.

The company is working on a new feature that will allow users to access the on/off switch without the administrator's password. Then, if a user switched it off, the administrator - most likely the parent - would get an email alert. It gives control to the user, while still giving the parent the option for a conversation.

More apps will hit the market, more politicians will sign laws against it, but it seems that for now, the best solution may be continuing to educate drivers on the dangers of texting and driving, as Foxx's new national campaign attempts to do.

According to the federal website Distraction.gov, at least 25 percent of teens respond to at least one text message every time they drive, with 20 percent of teens admitting to extended text conversations while driving. Parents aren't much better: 10 percent say they have multi-message text conversations while driving. When drivers under the age of 20 are involved in fatal crashes, 10 percent of them are distracted at the time they crash.

Sobering numbers, but they pale in comparison to the most sobering of all: according to the Insurance Institute for Highway Safety, texting while driving kills 11 teens every day.