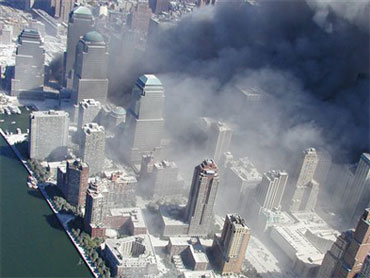 The photos were obtained by ABC News, which filed a Freedom of Information Act request with the National Institute of Standards and Technology last year. The NIST collected the images as part of its investigation into the terrorist attack.

ABC said it was provided 2,779 pictures on nine CDs. Many of the photos, taken from police helicopters, have never been released before.

Twelve of the photos appear on ABC's Web site. One photo shows a close-up of the upper floors of the burning towers. Others show the towers' dramatic collapse in a thick plume of smoke and debris and sweeping views of billowing smoke clouds.

The release of the photos comes as the Obama administration wrestles with deciding where to conduct the criminal trial against the terrorist attack's alleged mastermind, Khalid Sheikh Mohammed.

The administration recently when deciding where to hold the terror trials.

Objections from New York City officials and residents have intensified since the Justice Department announced late last year it planned to put Mohammed and other accused Sept. 11 conspirators on trial in federal court in lower Manhattan.

In its new budget, the Obama administration is proposing a $200 million fund to help pay for security costs in cities hosting terrorist trials.

In 2008, the NIST notably of World Trade Center building 7, a source of long-running conspiracy theories.

The 47-story trapezoid-shaped building sat north of the World Trade Center towers, across Vesey Street in lower Manhattan. On Sept. 11, it was set on fire by falling debris from the burning towers, but skeptics have long argued that fire and debris alone should not have brought down such a big steel-and-concrete structure.

Scientists with the NIST said their three-year investigation of the collapse determined the demise of WTC 7 was actually the first time in the world a fire caused the total failure of a skyscraper.

The new views of the terrorist attacks - one of the most recorded events of all time - add to the hundreds of hours of amateur videos, images and stories at ground zero.

The National Sept. 11 Memorial & Museum launched a Web site on the eve of the eighth anniversary of the attacks with its collection of citizen journalism of the tragedy and is appealing for more 9/11 stories from all over the world.