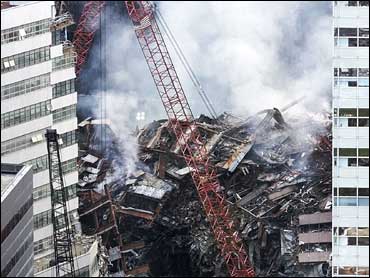 Federal investigators said Thursday they have solved a mystery of the Sept. 11, 2001 attacks: the collapse of World Trade Center building 7, a source of long-running conspiracy theories.

The 47-story trapezoid-shaped building sat north of the World Trade Center towers, across Vesey Street in lower Manhattan. On Sept. 11, it was set on fire by falling debris from the burning towers, but skeptics have long argued that fire and debris alone should not have brought down such a big steel-and-concrete structure.

Scientists with the National Institute of Standards and Technology say their three-year investigation of the collapse determined the demise of WTC 7 was actually the first time in the world a fire caused the total failure of a skyscraper.

"The reason for the collapse of World Trade Center 7 is no longer a mystery," said Dr. Shyam Sunder, the lead investigator on the NIST team.

Investigators also concluded that the collapse of the nearby towers broke the city water main, leaving the sprinkler system in the bottom half of the building without water.

The building has been the subject of a wide range of conspiracy theories for the last seven years, partly because the collapse occurred about seven hours after the twin towers came down. That fueled suspicion that someone intentionally blew up the building in a controlled demolition.

Critics like Mike Berger of the group 9/11 Truth said he wasn't buying the government's explanation.

"Their explanation simply isn't sufficient. We're being lied to," he said, arguing that there is other evidence suggesting explosives were used on the building.

Sunder said his team investigated the possibility that an explosion inside the building brought it down, but found there was no large boom or other noise that would have occurred with such a detonation. Investigators also created a giant computer model of the collapse, based partly on news footage from CBS News, that they say shows internal column failure brought down the building.

Investigators also ruled out the possibility that the collapse was caused by fires from a substantial amount of diesel fuel that was stored in the building, most of it for generators for the city's emergency operations command center.

The 77-page report concluded that the fatal blow to the building came when the 13th floor collapsed, weakening a critical steel support column that led to catastrophic failure.

"When this critical column buckled due to lack of floor supports, it was the first domino in the chain," said Sunder.

The NIST investigators issued more than a dozen building recommendations as a result of their inquiry, most of which repeat earlier recommendations from their investigation into the collapse of the two large towers.

In both instances, investigators concluded that extreme heat caused some steel beams to lose strength, causing further failures throughout the buildings until the entire structure succumbed.

The recommendations include building skyscrapers with stronger connections and framing systems to resist the effects of thermal expansion, and structural systems designed to prevent damage to one part of a building from spreading to other parts.

A spokeswoman for the leaseholder of the World Trade Center, developer Larry Silverstein, praised the government's work.

"Hopefully this thorough report puts to rest the various 9/11 conspiracy theories, which dishonor the men and women who lost their lives on that terrible day," said Silverstein spokeswoman Dara McQuillen.

In discussing the findings, the investigator Sunder acknowledged that some may still not be convinced, but insisted the science behind their findings is "incredibly conclusive."

"The public should really recognize the science is really behind what we have said," he said, adding: "The obvious stares you in the face."