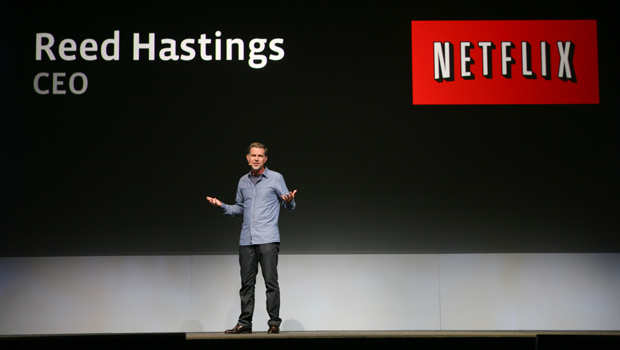 SAN FRANCISCO Netflix's (NFLX) Internet video service warded off stiffer competition to add 2 million U.S. subscribers during the final three months of the year to produce an unexpected profit for the company.

The fourth-quarter performance announced Wednesday validates investors' recent confidence in Netflix Inc., whose volatile stock had surged by more than 30 percent since early December. The stock soared another $34.49, or 33 percent, to $137.75 in extended trading after the numbers came out. If the shares trade similarly in Thursday's regular trading session, it will propel Netflix's stock a new 52-week high.

The surge in new customers left Netflix with 27.1 million U.S. subscribers to its service that streams movies and TV shows to Internet-connected devices.

Netflix's expansion also gathered more momentum as the company ended the quarter with an additional 1.8 million subscribers outside the U.S.

Netflix also still has 8.2 million customers signed up for the DVD-by-mail rental plans that launched the company's early success. Although Netflix is phasing out the disc service, the company hung on to more of the DVD subscribers than it anticipated during the fourth quarter. Netflix lost 382,000 DVD subscribers during the quarter.

Taking their cue from Netflix's own projections in October, analysts polled by FactSet had predicted the company's would lose 12 cents per share as expenses for the international expansion and video-licensing rises outpaced revenue growth.

Revenue climbed 8 percent from the previous year to $945 million, about $10 million above expectations.

Netflix appears confident that its recent momentum will carry into the current quarter, which will be highlight by the Feb. 1 debut of a much-anticipated TV series called "House of Cards" produced exclusively for the video streaming service. The series stars Academy Award-winning actor Kevin Spacey.

The company forecast its video streaming service will pick up 1.35 million to 2.1 million in the U.S. during the first three months of this year.