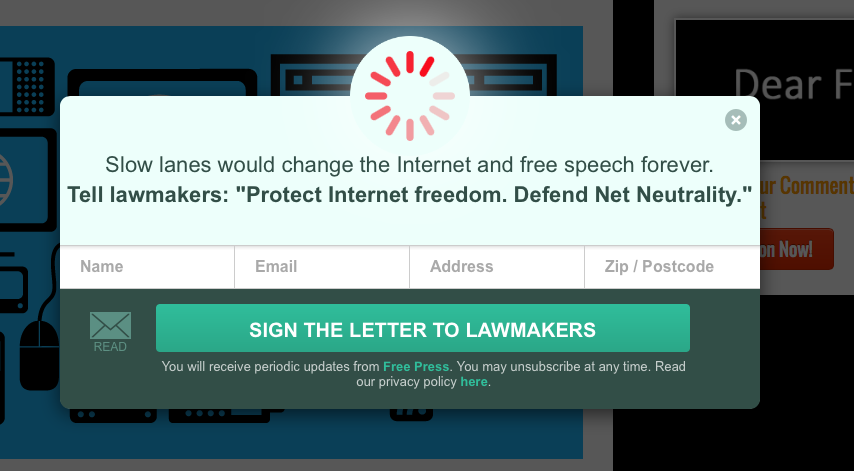 Should Internet providers like Comcast or Verizon get to control the speed the web, making some sites load slower and others, who can pay for the speed, go faster?

Supporters of net neutrality, the principle that all data and all websites are equal, say they shouldn't. Many websites are joining an "Internet Slowdown" protest today to make the point, and to try to prevent rules that would give Internet providers more latitude to create Internet fast lanes.

The Federal Communications Commission (FCC) set rules to preserve open access to the Internet, but has not yet made a final ruling on net neutrality. FCC Chairman Tom Wheeler proposed banning Internet providers from slowing down specific websites, but his proposed rules would not ban special high speed "toll" lanes set aside for companies willing to pay for them. Hundreds of websites, including those for large broadband-dependent companies like Mozilla, Vimeo, Reddit and Upworthy, and activist groups like Fight for the Future are supporting the protest as they ask the FCC to ban paid fast lanes.

Evan Greer, campaign manger for Fight for the Future, told CBS News by phone that his group believes net neutrality is essential to keeping the Internet a "level playing field." He said, "Once cable companies can decide what we can see, it is a threat not only to us as consumers but to freedom of speech and democracy."

Net neutrality itself is not the biggest worry for broadband providers and the companies that manufacture equipment for them. As reported in the Wall Street Journal, they do not object to net neutrality as much as they object to reclassifying the Internet as a utility.

Greer says he came to this issue from personal experience running a small web site. "I was a musician, and my ability to post my music and make a living, travel around the world and have people in Europe sing along with my songs even though I had never been there, all depended on the Internet. I didn't have money for guitar strings, much less any to pay a toll to Comcast or Verizon to get my music in front of my audience."

The FCC is expected to issue its final rules some time before the end of the year.