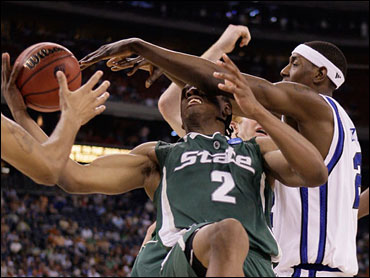 Memphis has been stripped by the NCAA of every victory in its 38-win season under coach John Calipari that ended in the national title game last year. The reason: an ineligible player believed to be Derrick Rose.

The announcement Thursday came 16 months after the Tigers lost to Kansas in the championship game following the 2007-08 season. Memphis president Shirley Raines said the school would appeal the ruling.

It is the second time both Memphis and Calipari had to vacate Final Four seasons. The Tigers were stripped of their 1985 appearance and Calipari's Massachusetts team lost its 1996 berth.

Calipari is now the basketball coach at Kentucky, where officials have voiced support for him despite the Memphis scandal.

"I'm not worried about it because they have never said Coach Cal did anything wrong at all," said Kentucky Gov. Steve Beshear, who appeared with Calipari at the Kentucky State Fair on Thursday before the NCAA announcement. "I think he's a very upstanding guy. I think that's his reputation and I think that reputation will be with him here. I really don't foresee any problems."

Asked about the possibility of a vacated season Calipari said: "I would be disappointed if that's what they chose to do."

In its report, the NCAA did not identify the ineligible player by name, though earlier descriptions of him lead to the conclusion it could only be Rose. He was taken by the Chicago Bulls as the No. 1 pick in the 2008 draft and went on to win the NBA rookie of the year award.

The player was accused of having another person take his SAT exam so he would be eligible as a freshman. Memphis argued it did not have enough information to substantiate the allegations in November 2007 and cleared him to play.

"We know the rules. We did our due diligence," Raines said at a news conference. "We did everything we could to determine the student-athlete was eligible and that the rules were being followed. That is the basis for our appeal."

However, the SAT officials later conducted their own investigation and notified the player, the university and the NCAA's eligibility center that they were canceling his test in May 2008.

The agency said it sent letters to the player in March and April 2008; the second letter was sent three days after Rose and the Tigers lost to the Jayhawks. The player did not respond to either letter.

The infractions committee said it struck hard with its penalties because the ineligible player was used the entire season.

In addition to the lost season, Memphis must also return the money it received from the NCAA tournament to Conference USA and will be prevented from receiving future shares doled out in the conference's revenue-sharing program.

Rose and his agent did not immediately respond to requests for comment. Two weeks ago, he told reporters he had talked with Calipari about the situation. "I know I didn't do anything wrong," he said.

The NCAA said the committee pressed Memphis officials during a hearing on the matter about why steps weren't taken in November 2007 to bench the ineligible player and avoid problems.

The committee also said the player's brother received free transportation on the team's charter plane and hotel lodging that season. Investigators said the total cost would have come to $1,713.85. Such an arrangement is considered an impermissible extra benefit.

"Neither the travel coordinator nor the business director had an explanation as to how the brother was permitted to board without having paid for the two flights," the NCAA report said.

The school's women's golf team also received three years probation and lost a scholarship for violations in its program.