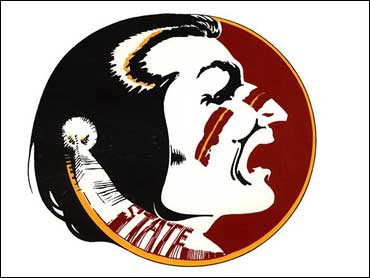 Fed up with what it considers "hostile" and "abusive" American Indian nicknames, the NCAA announced Friday it would shut those words and images out of postseason tournaments, a move that left some school officials angry and threatening legal action.

Starting in February, any school with a nickname or logo considered racially or ethnically "hostile" or "abusive" by the NCAA would be prohibited from using them in postseason events. Mascots will not be allowed to perform at tournament games, and band members and cheerleaders will also be barred from using American Indians on their uniforms beginning in 2008.

Major college football teams are not subject to the ban because there is no official NCAA tournament.

Affected schools were quick to complain, and Florida State — home of the Seminoles — threatened legal action.

"That the NCAA would now label our close bond with the Seminole people as culturally 'hostile and abusive' is both outrageous and insulting," Florida State president T.K. Wetherell said in a statement.

"I intend to pursue all legal avenues to ensure that this unacceptable decision is overturned, and that this university will forever be associated with the 'unconquered' spirit of the Seminole Tribe of Florida," he added.

Delta variant accounts for over 80% of COVID cases

The committee also recommended that schools follow the examples of Wisconsin and Iowa by refusing to schedule contests against schools that use American Indian nicknames.

While NCAA officials admit they still can't force schools to change nicknames or logos, they are making a statement they believe is long overdue. Eighteen mascots, including Florida State's Seminole and Illinois' Illini, were on the list of offenders.

Those schools will not be permitted to host future NCAA tournament games, and if events have already been awarded to those sites, the school must cover any logos or nicknames that appear.

"Certainly some things remain to be answered from today, and one of those things is the definition of what is 'hostile or abusive,'" said Tom Hardy, a spokesman at Illinois.

The NCAA did not give a clear answer on that.

President Myles Brand noted that some schools using the Warrior nickname will not face sanctions because they do not use Indian symbols. One school, North Carolina-Pembroke — which uses the nickname Braves — will also be exempted because Brand said the school has historically had a high percentage of students, more than 20 percent, who are American Indians.

"We believe hostile or abusive nicknames are troubling to us and it can't continue," committee chairman Walter Harrison said. "We're trying to send a message, very strongly, saying that these mascots are not appropriate for NCAA championships."

The decision, however, quickly evoked passions and complaints from both sides.

At Florida State, Wetherell said the NCAA was trying to embarrass the school for using its nickname, even though the Seminole Tribe of Florida has given the university permission to continue using it.

"Other Seminole tribes are not supportive," said Charlotte Westerhaus, the NCAA vice president for diversity and inclusion.

Vernon Bellecourt, president of the National Coalition on Racism in Sports and Media and a member of the Anishinabe-Ojibwe Nation in Minnesota, approved of the ban but had hoped the NCAA would take even stronger action.

"We're not so happy about the fact that they didn't make the decision to ban the use of Indian team names and mascots," he said.

Harrison, president at the University of Hartford, said the executive committee does not have the authority to do that, and schools can still appeal their inclusion on the list.

Brand and Harrison said they hoped school officials would pursue policy changes through the NCAA first, before going to court.

"I suspect that some of those would like to having a ruling on that," Brand said. "But unless there is a change before Feb. 1, they will have to abide by it."

Two years ago, the NCAA recommended schools determine for themselves whether Indian depictions were offensive.

CBS News Correspondent Tom Foty reports that the NCAA had investigated 33 schools nicknames and that about half have changed their names since then, leaving the 18 schools now subject to the new mascot and nickname restriction.

Among the schools to change nicknames in recent years were St. John's (from Redmen to Red Storm) and Marquette (from Warriors to Golden Eagles).

But that hasn't changed opinions on either side.

"They're not willing to give up this money," Bellecourt said, referring to merchandising revenue. "We would hope that it (the decision) was the handwriting on the wall that would urge them to drop these team names and mascots."