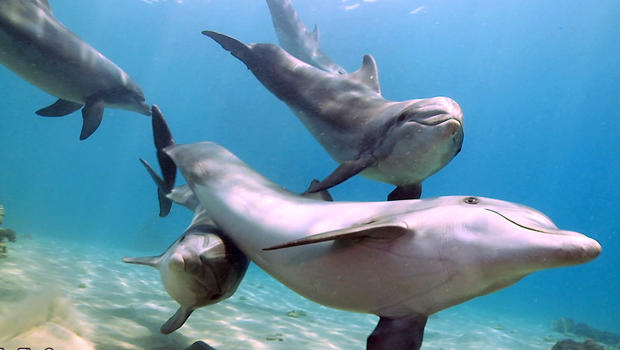 "Sunday Morning" videographer Ziggy Livnat writes about his encounters with the curious, playful marine animals while filming under the sea:

It seems that for centuries, the marine animal that we humans connect to the most is the dolphin. It is always an exciting pleasure to run into them while I'm diving. Most times they would show up, swim around me once or twice to check me out, and continue on their way. On a rare occasion they will stick around and play around me, or just freeze in midwater as if to check me out or try to tell me something.

They possess a larger brain then humans and high communications skills. They communicate with continuous tone and burst-pulsed sounds (whistles and clicks). Clicks are used to sense their surroundings through echolocation, while whistles are used to communicate with other members of their species and, very likely, with other species, too. Dolphins have a vocal and auditory range that far exceeds that of humans, In fact, dolphins are able to hear, and to produce, some of the highest-frequency sounds of all mammals.

As we know, dolphins use sonar for examining objects. This means not only do they sense the outside of a person swimming with them, but also in some way its internal organs. They are especially excited by pregnant women, and can sense some disabilities or sickness very well.

Dolphins are air-breathing mammals like us. Dolphin babies do not know exactly how or when to come to the surface to breath, so they follow their mother. But the mother can hold her breath for a longer time than the baby. So for about a year, the mother monitors the baby's surface breathing and helps when needed. This goes on 24/7, no rest, no substitutes. This is also one of the reasons why separation of young calves (baby dolphins) from their mother often results in the calf's death.

Dolphins are very curious and playful. I believe this is one of our main attractions to them, as they remind us of our own similar characteristics. It should be noted that dolphins are very strong animals that can kill a shark, or significantly injure a person. They often give a warning before hitting someone, and they are not known to hit random people. As long as we are keeping a respectful distance and not trying to chase or grab them, no harm will come to us.

Dolphins, like all animals in the ocean, suffer greatly from plastic trash. It is estimated that about 100,000 marine mammals die every year from ingesting plastic litter. Their future is in our hands.

Filmed at the Dolphin Reef, Eilat.