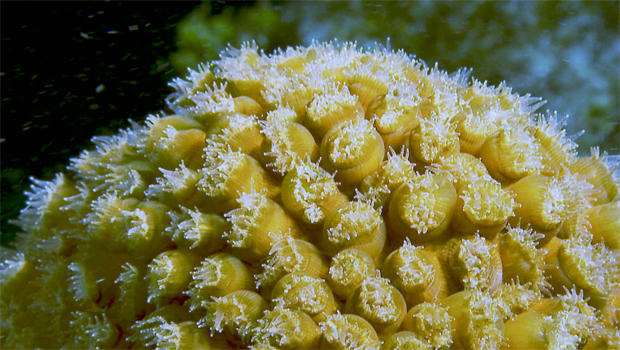 Culebra is a small island located approximately 17 miles east of the Puerto Rican mainland. There are only about 2,000 people living on the island. It is a beautiful place with nature all around.

I traveled on the boat to film in the Luis Peña Channel Nature Reserve, on the west coast of Culebra, with Robert Matos from the Department of Natural and Environmental Resources (DNER) in Puerto Rico. He was installing "no fishing" delimitating buoys marking the boundaries of the reserve.

This is the first designated "no-take" marine protected area in Puerto Rico. It was proposed by the Culebra Fishermen's Association to replenish local fish stocks and protect the coral reefs and managed by the DNER.

Thanks to the no-take zone, the coral reef, an amazingly rich ecosystem, is thriving. It has thousands of species finding a home in structures which look like colorful rock but are alive. Every coral is a colony of many living organisms called polyps. In the center of each polyp there is a little mouth.

The tiny polyps play a crucial role. Using their arms and little mouths, they eat tiny organisms. This is how the reef develops, and its corals grow very slowly, only about an inch per year. They are very sensitive to water temperature changes, and these days with global warming, we see many coral colonies that suffer.

One of my favorite species on the reef is the squids. The Caribbean Reef Squid are better known as calamari on one's plate, but when they're alive in the ocean they are beautiful and extremely intelligent social animals.  Special pigment cells along their bodies enable them to communicate with each other using a complex system of flashes, patterns, and color changes.

In Culebra, I was lucky to see for the first time squids mating, during which an alluring dance of flashing colors is expressed in the sometimes hour-long courting ritual, while the actual mating happens in the blink of an eye.

I am looking forward to returning to Puerto Rico and Culebra. It is a very special place with very warm and beautiful people.