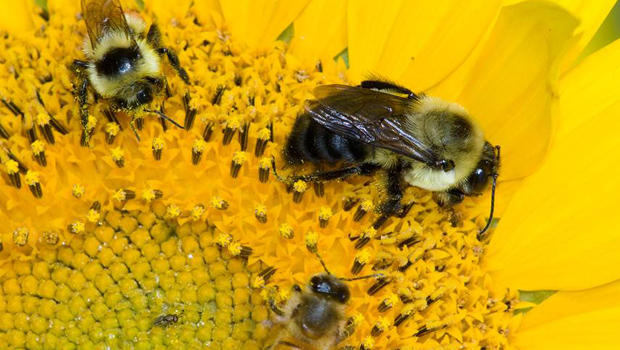 If you consider you average summer picnic table, you would be hard-pressed to find a single veggie or fruit option that bees didn't help provide. Apples, strawberries, tomatoes, grapes, peaches, oranges, squash, avocados, onions, apricots, lemons and watermelon are just some of the foods we wouldn't have if we didn't have bees to pollinate them.

Humans have had a relationship with bees for thousands, maybe even millions of years. It took us a while to figure out how important they were for pollinating much of our food, but we have known they produce delicious honey for a long, long time.

One of the ways we know we have a very old relationship with bees is because many African men have had a partnership with a small bird, the honeyguide, much longer than recorded history. To many researchers, this partnership is the first proof of human communication with wild species. We have been successfully communicating with domestic animals for thousands of years, but not with a truly wild animal.

It is a perfect relationship, as humans aren't good at finding bee nests, but are good at breaking into those nests, while honeyguides are good at finding bee nests but can't break into them (or could be quickly stung to death if they tried). Once the humans get to the nest, they use smoke to calm the bees while they take some of their honey. They also leave a piece of the bee's comb nearby as a thank-you for the honeyguide, who eats the wax and larva.

In the last 9,000 years or so, humans have taken the human-bee relationship further by keeping them in boxes and harvesting their honey. Originally bees were kept in split and hollowed-out logs. Those logs have evolved into today's bee boxes.

Beekeepers and their bees are also an essential link in food production as they move their bees to farms where plants need pollinating. This is especially essential in areas were fields are plowed from fence to fence, leaving no habitat for native bees.

My father was a beekeeper who introduced me to beekeeping when I was 10 years old. He decided to collect a swarm of bees bivouacked on an oak tree limb in our neighbor's yard and asked me to help. He perched on a stepladder and sawed the limb while I waited under it with an empty bee box on my shoulder. Normally, a hive swarms when an old queen bee is ousted by a new one.  The old queen takes some of the bees with her and forms a protective swarm while scouts look for a suitable tree hole for her new nest. Because the resting bees have no hive or honey to protect they are usually quite docile, making it a good time for an alert beekeeper to capture a swarm.

However, one thing my father failed to consider was that surprised bees also swarm. Once my dad got the limb cut, it fell a good 15 feet before it hit the box on my shoulder. The limb crushed many of the lowest bees and made the ones who survived really mad. I ran off as fast as I could away from the angry cloud of bees. It was a good number of years before my father convinced me to help him gather another bee swarm.

Bee populations have been struggling. Although some research points to neonicotinoid pesticides as an obvious cause of their decline parasites, disease, loss of habitat and climate change are problems as well.

Bee extinction may sound drastic, but due to their decline in recent years, it is possible. As many as 700 bee species are threatened with extinction in North America alone. As Kelsey Kopec, a pollinator researcher has stated, "If we don't act to save these remarkable creatures, our world will be a less colorful and more lonesome place."